On the child gambling epidemic and fake news 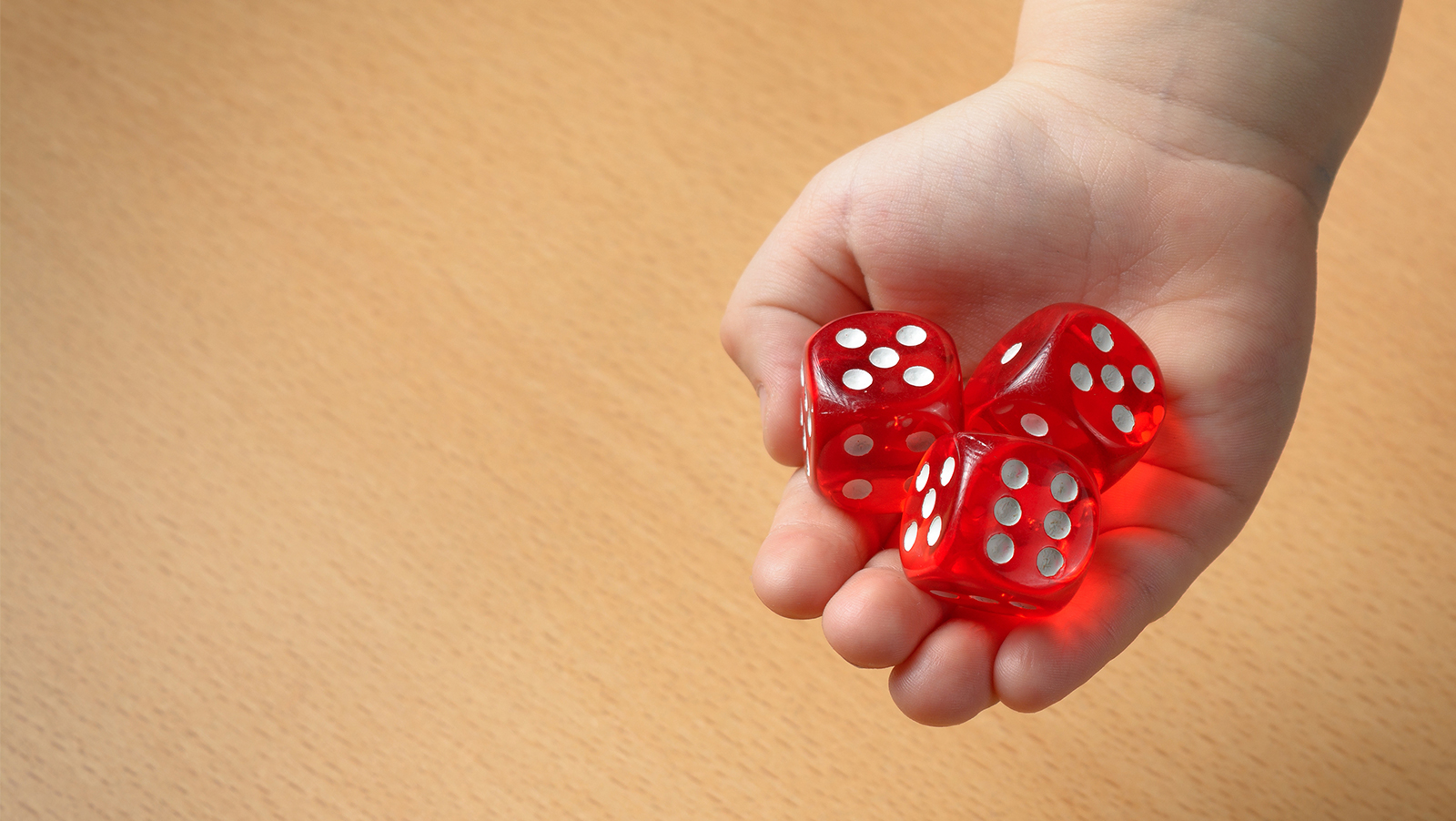 Today let’s talk about that ever-popular overused ubiquitous international multilingual moniker since the election of Donald Trump, “Fake News.” The term is even spewing out of my phone in transliterated Hebrew (פייק ניוז) as Israeli politicians fling the hackneyed term at one another like irked chimps, not quite realizing that the electorate is human. And yes, Israel just had an election three months ago, but we’re doing it again. For fun.

Before we begin, let me start off with a concession statement. Childhood problem gambling is a bad thing. Parents of those affected should seek treatment, and donating voluntarily to a charity that deals with the problem is a good, commendable act. Now, onto business.

Exhibit A: Headline out of The Guardian this morning, which has gone way downhill ever since the departure of Glenn Greenwald: “Irresponsible’ firms exposing children to gambling, study finds”. Ah, yes, the study finds. Good for the study. Save the children. Is there a link to the study in the article? Nope. But, thankfully (never take this for granted), The Guardian does say where the study comes from. It’s some genius think tank or other called “Ipsos Mori,” Latin for (I am not making this up) “They Die.” To be technical though, it’s actually Ipsos MORI (see page NINE). The Guardian neglected to CAPS DEATH. So really, They DIE. So what do the DEAD tell us about the state of underage gambling in the United KingDOM? I had to use my sharply-honed Googling skills to find THIS. It took me six seconds or so. I’m a slow TYPER.

The survey found that 14% of 11-16 year olds in Great Britain had spent their own money on one or more of the listed gambling activities in the past seven days. This equates to approximately 450,000 young people aged 11-16 who have gambled in the past week. This figure is 2 percentage points higher than the 12% recorded in 2017….

I’ll just copy and paste the chart from the study. Maybe I’ll win a Pulitzer for this excruciating in-depth research or something. Maybe The Guardian will hire me. (HA!) 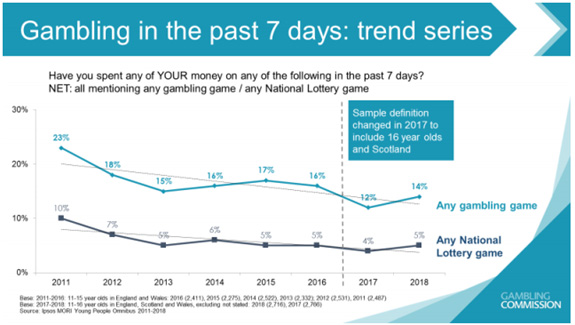 But wait, there’s more. What are these child gamblers actually doing?

The pattern of young people’s participation in different gambling activities in the past 7 days remains similar to previous years. Much of this activity is legal (such as private bets with friends, playing on certain machines on certain types of premises or 16 year olds who take part in National Lottery games) or takes place on premises that do not require a gambling licence…

The most common form of gambling that young people have spent money on in the past week is private betting for money (e.g. with friends), with 6% of 11-16 year olds having done so. The next most common forms of gambling are National Lottery scratchcards (4%), fruit/slot machines at an arcade, pub or club (3%) and playing cards for money with friends (3%). Taking all responses account, 6% of respondents had gambled on gambling premises while 7% had gambled privately with friends and 5% had played a National Lottery game. All these figures are comparable to the rates recorded in 2017.

Predictably, it doesn’t even stop there. The Guardian article links back to a 7-month-old “Save The Children” piece entitled, “Number of problem gamblers aged 11-16 rises to 55,000”. Oh no. Everybody put your kids in a straight jacket and throw them into a survival bunker. It’s for their own good.

The great thing about that piece of work article is that its source is the same exact report I’m quoting here. You can’t make this stuff up.

So what does the dead people report really say about the problem gambling children? Let’s check out the Problem Gambling subsection, page 6:

The survey indicates that 1.7% of 11-16 year olds are problem gamblers, 2.2% are ‘at risk’ gamblers and 32.5% are non-problem gamblers. These percentages are based on the youth adapted problem gambling screen DSM-IV-MR-J 6 . These figures represent an increase compared to the rates of problem and at risk gambling seen in the 2017 survey (0.9% and 1.3% respectively).

Uh oh…an increase! Let’s stop right there and not read anything else and just slap it in The Guardian! Oh but I can’t resist reading more! It’s just so captivating!

Now, just to make sure we really internalize and fully understand the fact that this “data” is nonsensical misleading crap, the Gambling Commission, using data compiled by people supposedly alive at Ipsos MORI, reiterates this explicitly on page 33. This follows a chart of the fake data that newspapers all over the U.K. are free to copy and paste while expressing extreme worry on their furrowed empathetic brows of justice, to show how serious of an issue problem gambling among children actually is. Here’s the scary scary chart: 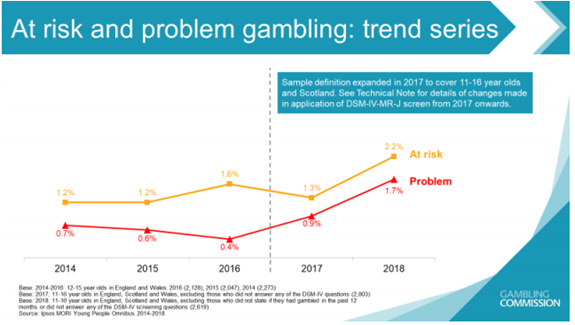 Looks bad. The caveat: (It’s right there! It’s not even in a footnote people!)

Is there something wrong with the investigative reporters at The Guardian perhaps? Not enough coffee? Or are they spending too much time gambling? Not enough time Googling about the dead people at the think tanks?

But let’s forget about honest reporting for a second. Or forever. Who cares? What matters is that we DO SOMETHING TO SAVE THE CHILDREN!

Like what, prithee? Well, according to the Wise Sage Tom Watson, the Secretary of Shadow, mandatory levies. He means mandatory donations to charities dealing with problem gamblers. Here’s an idea Tommy. If you want more money for gambling addiction treatment, why don’t you just use some of the money from those point-of-consumption tax hikes you helped pass through Parliament? Uch, but then the government people have to, like, move the money over and the temptation to take it is too much for them. We understand.

After all, who can argue with such a bombastic subtitle to an article about children gambling their lives away? “Quadrupling of figure in two years branded ‘generational scandal’ and blamed on TV ads and smartphone apps.”

Let’s end on an up note. Here’s the final quote from that same article, from the Bishop of St Albans, the Right Reverend Alan Smith, who I actually wholeheartedly agree with when he says:

Study away then. It shouldn’t take you more than a few minutes.