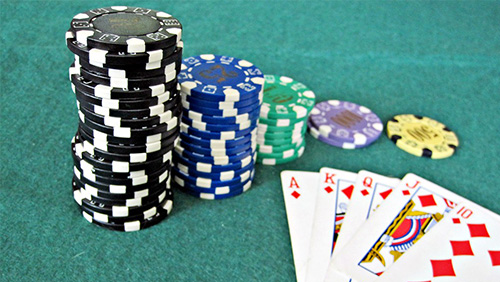 partypoker LIVE will have a brand presence in Las Vegas during the 50th Anniversary of the World Series of Poker, after partnering with ARIA Resort and Casino for a special edition MILLIONS Vegas.

If you want to wear the crown, it’s part of your sovereign duty to climb off your throne and meet your people. When it comes to the pecking order of live tournament operators, partypoker believes they wear that crown, and they are ready to meet their people.

It’s a critical year for partypoker’s MILLIONS armada. They’ve pumped up the buy-in to $10k and made each event a freezeout – both risks. The people will vote with their feet.

Laurels are not made to be rested upon, not in these parts. After a successful debut in South America, it’s time for partypoker to aim their ring towards the mouths of the North Americans, to see how many will kneel and kiss.

partypoker LIVE partners with the ARIA Resort and Casino in Las Vegas for MILLIONS Vegas ‘Special Edition’. From a strategic perspective, the move makes sense with players enjoying the World Series of Poker (WSOP) able to experience the MILLIONS brand, palpably, for the first time.

The $10,300, $5m GTD event takes place June 28 – July 2, and there are a few differences from the rest of the MILLIONS schedule. It’s not a pure freezeout. The event has two Day 1’s, and you can re-enter once each day. Players can also buy directly into Day 2 before the end of the first two levels. Judging by the press release, the changes are to appease the ARIA more than partypoker.

The event slips into the 2019 ARIA Poker Classic schedule, and live satellites begin at ARIA on Thursday, June 27. There is also an exclusive ‘invite only’ Players’ Party on Tuesday, July 2.

Partypoker Live Prez, John Duthie, chose ARIA to be their partner in the United States because he believes ‘they see things the same way we do,’ and that it’s ‘not all business’, it’s about ‘listening to players and growing the game.’

One of the challenges for partypoker must have been finding a place in the 50th Anniversary WSOP schedule. Flicking a razor down the WSOP schedule, these events seem to cut into MILLIONS Vegas’s time.

Word on the grapevine is that this isn’t the last MILLIONS announcement you will hear this year, so stay tuned.