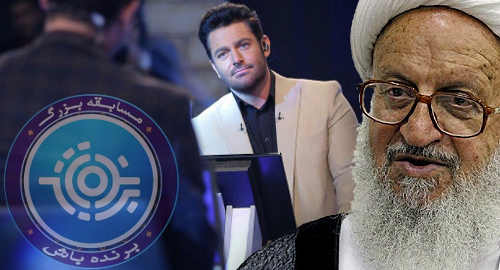 Iran’s religious authorities are cracking down on TV game shows, apparently because their games too closely resemble gambling products.

Iranian state television recently debuted a new program called Barande Bash (Be The Winner), a shameless knockoff of the UK’s global hit Who Wants To Be A Millionaire. The show, hosted by local singer/actor Mohammed Reza Golzar (pictured, without beard), has proven a ratings winner for the Islamic Republic of Iran Broadcasting (IRIB) company.

But the show’s arrival was met almost immediately by criticism from conservative cleric Grand Ayatollah Nasser Makarem-Shirazi (pictured, with beard), who published a fatwa (a nonbinding legal opinion) in a local newspaper declaring that such quiz shows offered “games of chance” and thus were effectively gambling, which is haram (forbidden) under Islamic law.

Other conservative media outlets quickly echoed the cleric’s claims, accusing IRIB of airing “a halal casino” and reminding Iranians of Supreme Leader Ayatollah Ali Khamenei’s 2004 condemnation of such programs for eroding the nation’s “culture of hard work and productivity” by offering contestants something for nothing (other than brain power).

The show’s producers responded to the furor by claiming that “the assumptions presented in the question for the fatwa was wrong,” although the short statement offered no specifics. Regardless, IRIB has since suspended airing any further episodes of Barande Bash or other Western quiz-style programs

Unlike the million-pound/dollar prizes available to contestants on the Western versions of the program, the top prize on the Iranian show was an impressive sounding IRR1b, although that’s currently worth a mere US$23,718 (about one-third of what current Jeopardy champion James Holzhauer is earning on a nightly basis). If truth in advertising was a thing in Iran, the show would be forced to call itself Who Wants To Be Temporarily Slightly Better Off.

Iran’s Shiite mullahs may not see eye-to-eye with many of their Sunni counterparts across the Islamic world, but the two factions are of one mind when it comes to gambling. Clerics have issued fatwas condemning all forms of gambling as haram but they’ve also issued similar edicts against the game of chess and newfangled tech such as cryptocurrencies.