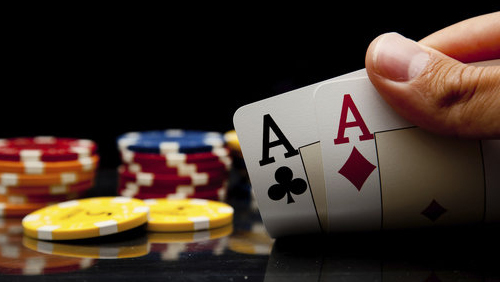 A few globules of vomit from the World Series of Poker (WSOP), and we’ll begin by regurgitating the business that took place in Dusk till Dawn recently.

The WSOP and partypoker are best buddies, and that means if you want to host an event in the UK you host it in Rob Yong’s boudoir, and that was the case as the World Series of Poker Circuit (WSOPC) arrived in Nottingham looking more Maid Marion than Friar Tuck.

The silver coin in this Christmas pudding was a the £1,100 buy-in, £1m GTD World Series of Poker Circuit (WSOPC) Main Event. 1,023 of the UK’s most exceptional poker players turned up to compete, and a Russian-born UK resident took it down.

Andrey Veselov had already locked up £99,030 after agreeing upon a threeway deal with Hasmukh Khodiyara (£111,935) and Timothy Chung (£97,065) when he also grabbed the additional £15,500 sitting in the middle looking like an Italian restaurant in Chinatown.

The impressive Chung fell first when his KQ failed to win his final flip against the pocket fours of Khodiyara, and the knockout meant Veselov began heads-up as a 2:1 dog. Veselov turned things around when KJo beat A7o, and the gold ring was his after flopping a flush when all-in pre-flop holding KsQs versus A9o.

It’s the fourth tournament win of Veselov’s career and is most significant bounty. He last won a tournament in 2016, and his previous best score was £23,950 for beating 702-entrants to win a £165 buy-in Super Stack event.

The WSOPC is truly international these days, and as Veselov was taking down the Main Event in the UK, Maurice Hawkins was claiming a record-tying 12th gold ring in North Carolina.

Hawkins has been in scintillating form of late making seven final tables in his previous eleven WSOPC events, and he finally booked the win in the $600 buy-in No-Limit Hold’em at the WSOPC in Harrah’s Cherokee.

The event attracted 391-entrants, and Hawkins claimed the $44,297 first prize, as well as the gold ring that sees him move level with Valentin Vornicu as yet another man who needs two more fingers.

It was Hawkins’ 24th tournament win, and he has now earned close to $3.7m in live tournament earnings.

Hawkins might have 12 gold rings, but he still doesn’t have a beautiful shiny bracelet. Winning a coveted WSOP bracelet is a tough thing to do, or you can head to eBay, and buy one for $50,000. That’s the price that Tom Franklin has slapped on the little sliver of gold he won in 1999 after defeating 104-entrants in a $2,500 Omaha Limit event. If you fancy owning a bracelet and have 50 gees available, then here’s the link.

To win a WSOP bracelet means you are a member of an exclusive club, although earlier this week, Dutch Boyd questioned exactly how exclusive that club was.

The three time WSOP bracelet winner had a ‘gazing out of the window’ moment when he posted this tweet:

Looking at the @WSOP schedule and trying to wrap my head around why the “Bracelet Winners Only” event, a fully raked $1500nl with $0 added, a stacked field, and a mini prizepool, is supposed to capture the excitement of anybody qualified to play it. Am I missing something here?!? pic.twitter.com/JutlrV7Xzl

The WSOP responded quicker than chalk when you get it next to a blackboard wearing a lacy number.

You’re right Dutch. No excuses. Our bad. How does rake-free sound? Okay, good, we’ll make that change for this event. Thanks for bringing it to our attention and see you there. https://t.co/UY9bdL96Vu