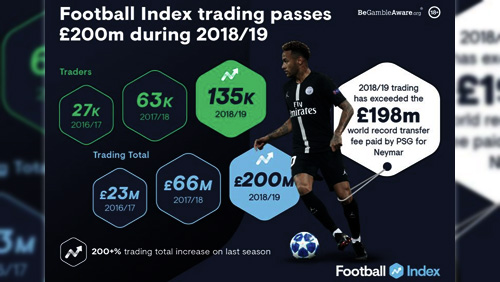 The unique financial and football hybrid has turned over more than £200m in trades since the current season’s market opened on Saturday, 10 August, 2018.

And with two months of the season remaining, Football Index is on course to register a ten-fold boost on its 2016/17 trading, which amounted to £23.34m

The disruptive platform gives traders the opportunity to buy and sell shares in professional footballers with real money, offering an exciting alternative to traditional sports betting.

Operating with all the characteristics of a stock market, traders buy units of footballers (known as ‘Futures’), building their football portfolios and trying to sell at a profit.

In addition, Football Index’s daily Buzz Chart monitors the UK media to determine trending footballers each day, with dividends paid out per future held. Since August 2018, Football Index has paid out more than £2m in dividends.

Adam Cole, founder and CEO of Football Index, said: “This is proving to be a vintage season for Football Index. Passing £200m in trades so far is a significant milestone and, with two months of the campaign remaining, there’s still plenty of buying and selling to be done.

“The huge growth in traders and trading on the platform makes it clear that our offering is gaining serious traction with punters fed up with betting against bookmakers. We’re also attracting a whole new audience that aren’t interested in traditional betting in the first place.”

Football Index currently has an offer for new users to trade up to £500 risk free for seven days. For further information or to start trading, visit: http://www.footballindex.co.uk.

Football Index is owned by BetIndex Limited, a privately owned Jersey based gambling operator established in 2015. Both the UK Gambling Commission and Jersey Gambling Commission have granted operator licenses to the company which is challenging the conventional ‘event’ based outcomes in traditional gambling products.