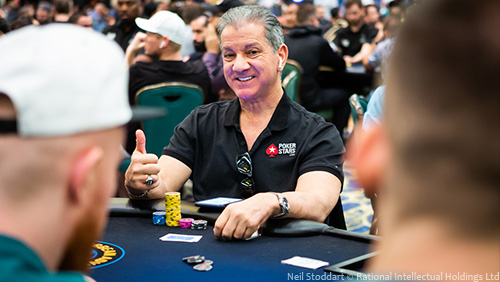 Lee Davy sits down with the legend of the Octagon, Bruce Buffer, to talk about his parent’s aspirations for him as a child, his views on fear and failure and much more.

I look at him, and he gives me a reassuring wave of the hand, up and down, not side to side.

Everything is going to be ok.

Some people I interview wear the look of a hunted rabbit – not Bruce Buffer. The man who has called the Octagon shots for the best part of a quarter of a century has a spine as strong as an oak tree.

Warmth radiates from him, eating away at the last remnants of a nervous disposition, and feeling settled, I begin with the cursory and unimaginative, ‘How are things?” because it feels like one of those conversations.

“Life is fantastic,” says Buffer. “I am in the Bahamas!”

The media guy who stole his time before I sat down convinced Bruce to deliver an impromptu and pitch-perfect shout out to someone.

Now I can’t ask him.

I give him the good news and tell him that he can rest his voice for the next five minutes.

“On February 16th, it’s going to be 23-years that I have been announcing in the Octagon. It’s like a muscle that you train, and it gets stronger,” says Buffer referring to the larynx that has turned him into a bastion of the fighting business.

Buffer is an entrepreneur at heart. The Octagon is one of many ways that he pays the bills. I wonder what career aspirations his parents had?

“They wanted me to do whatever I wanted to do,” says Buffer. “They supported me in anything I wanted to do. My Dad never graduated high school, but he had what I would say was pretty close to a genius IQ. He was an excessive book reader. He taught himself. He went on to run Fortune 500 companies. He was a writer, and he taught me a lot. We did business together. We used to collect and trade antiques and collectables. I would be on the road and go to shows with him, and it showed me a lot about marketing. I am a marketer and businessman first and foremost. I have owned many companies, I do motivational speeches teaching salespeople and teaching companies about branding, and marketing, and that comes from my dad.”

And what did Buffer want to be when he was a kid?

“I wanted to be an actor and a dancer,” says Buffer. “Then I started getting taller, and stronger, and martial arts became my thing when I was 11. I studied acting in Dallas; then we moved to Malibu, California when I was 15. I started retaking acting lessons at 17; figured that I would go out and do it. When I ran my first telemarketing company I employed a lot of actors; they were always coming in telling me that they didn’t get it, and it was a really hard thing. I was making a lot of money back then, and I was thinking, ‘Do I want to give this up, and pound the pavement?’ Not that I can’t deal with negativity. I teach salespeople. Like Zig Ziglar used to say, ‘You need ten no’s before you get a yes’, so rejection doesn’t bother me. I am a motivational speaker, and our job is to get you going. If you’re passionate about something, and you can make money out of it, is there anything better than that? It’s like playing poker, right?”

Buffer strikes me as the poster boy for the Susan Jeffers classic ‘Feel The Fear and do it Anyway.” I ask him what comes to mind when I say the word ‘fear.’

“It’s important to face your fears,” says Buffer. “Always look in the mirror, and be honest with yourself. Don’t be dishonest with yourself. Realise what your abilities are, and your goals are, step on that path, learn as much as you can about it and then be the best you can be. If you can take a passionate approach, then when you do get knocked down in business, and you will, you have to get up, it’s like fighting. You need to say, ‘I am going to learn from this experience, I am not going to have this experience again because that is going to be a mistake, and I don’t want to make any mistakes, but I have no problem having this first experience.’ To succeed you have to know what it’s like to fail.”

What is the first thing that comes to mind when he thinks about failure?

“Knowledge.” Says Buffer. “I will examine why I failed, look in the mirror, and be honest with myself, and then correct myself to do a better job next time.”

After spending so many years making other people feel as important as the Pope as they make their way to the Octagon, who would Buffer want to announce for him should he reach the WSOP Main Event Final Table, and what would be his tune?

“Me, because I have a bucket list,” says Buffer. “I have announced the November Nine, and the final table of the WSOP Main Event…I think five times, and my bucket list was always, “And now in Seat #9 – Me!” That’s something you fantasize about, and I am not saying it won’t ever happen, because I think it will.”

I ask him how poker makes him feel?

“I am a competitive person,” says Buffer. “I don’t spar, and stand across from someone or surf the big wave anymore, but I am very athletic. I have been an athlete my entire life. Poker fuels the competitive edge that I need, and it gives me that adrenaline rush of pulling in the ‘all-in’ pot, and when I win a poker tournament – and I have – I love making money, and the best form of money is the money you win gambling. It’s the best money to spend in the world.”