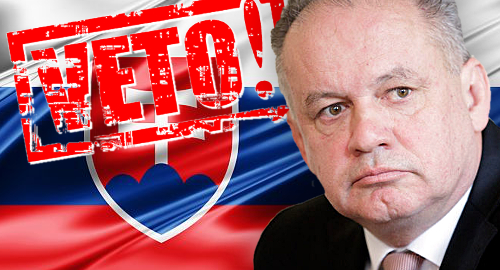 Slovakia’s president has vetoed his country’s new gambling regime, which would have opened up the online market to international operators for the first time.

On Friday, President of Slovakia Andrej Kiska issued a statement saying he refused to approve the online gambling regulations issued by the Ministry of Finance this spring and approved by the legislature earlier this month. Kiska (pictured) claimed to have “reservations that prove the error of the whole concept of the approved law.”

Kiska claimed that the new gambling rules contained insufficient consumer protection measures. For instance, Kiska wants all individuals who have declared personal bankruptcy to be included in the country’s national gambling exclusion registry.

Kiska also found fault with the legislation’s requirement for online gamblers to submit digital copies of their Citizen’s Card for identification verification. Kiska wondered if there was “a better way of demonstrating the eligibility to play gambling that would not pose a risk for the protection of sensitive and misleading personal data.”

The legislation doesn’t specify how gambling revenues will be spent by the government, and Kiska wants the legislature to come back with a plan that directly links gambling taxes and fees to fund problem gambling programs.

Finally, Kiska wants the legislature to grant local governments more authority in determining what type of gambling will be permitted within their municipalities. The legislation prevents gambling operators from setting up shops too close to schools, but Kiska wants to see this extended to include “places designed to express religious, moral and other personally sensitive attitudes, such as churches or institutions.”

Slovakia’s legislature will now have a choice of amending their gambling plans to suit Kiska’s suggestions or vote to override his veto, which would require support from two-thirds of the National Council. The legislation had called for online casino hopefuls to submit their license applications by March 1, 2019, while the online sportsbook license derby was to begin on July 1.