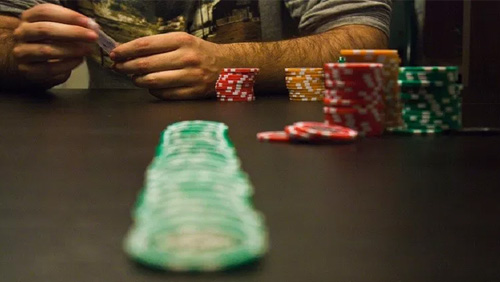 Two poker news stories from the grassroots of the game as a charity poker room in Indianapolis is under investigation by local authorities, and a 26-year-old man stands trial for killing a man during a high stakes poker game in Missouri.

The $10 rebuy began at 7 pm on a Tuesday night. 2-3 bar flies looking like a pair of peeled hard boiled eggs sit on stools talking about the best way to cut your toenails.

We’re in the corner.

A £10 note slides across the table, and Eddie’s Dad Steve shifts it to his back pocket so quickly you aren’t sure if you saw it.

There is no rake; 100% of the profits go back to the players, and the landlord gets 12 more people into his pub on a night when he would save money on electricity if he closed it.

Only, we are breaking the law.

We hide the money.

You never know when the local bobby will walk in.

A local bobby has never walked in.

We don’t have a license.

Maybe we should have created a charity.

Earlier this week, The IndyStar reported that in August, The Indiana Gaming Commission and the local state police had raided and closed down a charity gaming room in Indianapolis.

According to the Indiana Gaming Commission 2017 Annual Report, The Northside Knights of Columbus, operating out of Marion County, hauled in close to $4.4m in gross gaming revenue, $3.75m of which came from a poker room that can house 80-people.

The Gaming Commission is a little tight-lipped on the reasons behind the bust, using the word ‘undisclosed,’ but did open up to say that the club ‘violated technical rules that govern their licenses for poker, bingo and raffles.’

The Northside Knights, who opened for business in 1993,  hold three gaming licenses.

“We have advised the leaders of the group that we are reviewing certain things that are very concerning,” Jenny Reske, deputy director of the Indiana Gaming Commission told the IndyStar. “The goal is to determine where they are falling short and to address those problems.”

Dave Short, the man who has run the poker game for the past six years, told the IndyStar that the violations were trivial – “they weren’t big other than we just didn’t know the rules.”

The report suggests the whistleblowers (likely disgruntled poker and bingo players on tilt) reported them for not having tipping signs, giving free food to gamblers, and not displaying multiple copies of their gaming license.

John Creamer (I love that name), who runs the bingo side of the business, told the IndyStar that in the past five years, the club had spent $341,000 renovating the building, and $182,000 on charitable causes such as Bishop Chatard High School, and St. Baldrich’s Foundation (a foundation that helps children suffering from cancer).

The Northside Knights were able to spend $341,000 on their building because they are a registered charity. Maybe this is where the real investigation lies, after all, last year, authorities raided the charity poker room with the most significant revenue, The Fraternal Order of Eagles No. 3512 in Fort Wayne, after finding out they had raked $4.6m in gaming revenue, and given $17,000 to charity.

Another thing that isn’t going to happen in my local game is someone being gunned down, something that happened four years ago, during a private high stakes poker game in a Stafford shopping centre.

On the night of July 17, two masked men armed with rifles broke into the poker game, firing shots, and stealing $20,000 from the players. While anarchy ensued, Donald Leonetti, an owner of a t-shirt printing company in Missouri City, walked in on the game and tried to stop one of the gunmen. He was shot and died from his wounds.

A fortnight after the murder, police arrested 26-year-old Eric Norris and charged him with capital murder. The case has dragged on like a nasty case of insomnia for the past four years.

If found guilty, Norris could face life in prison without parole.