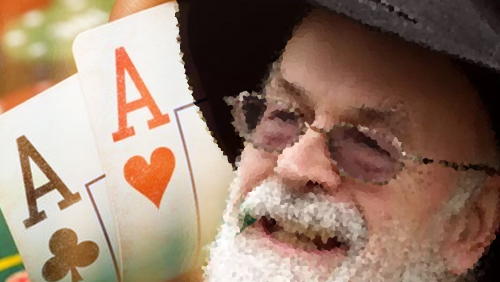 Inspired by Terry Pratchett’s A Slip of the Keyboard, Lee Davy, explains why his granny should start playing poker.


The vagabond lifestyle has its benefits, but it has one painful flaw when you earn your living hunched over a laptop. After another night where a zombie had more sleep than me, I scoped out a new cafe where I could set up camp for a few hours.

“Can I have that seat in the corner,” I ask the lady who welcomes me.

“Yes, but, I must warn you, there is a man who comes in here every day at 12:20, and he is rather particular about this seat.” She replies.

And what does ‘particular’ mean?

If he finds me, sitting in HIS seat is he going to order a pot of Rooibos & Orange Tea, and tip it over my head, cackling as I run around the gaff searching for the cold water tap.

It’s not a Rooibos & Orange Tea type of place.

“Are you still trying that Coconut stuff, love?” The owner asks a customer as I set up my laptop.

“It’s a scam. There’s nothing wrong with milk from a cow. I’ve been drinking it for years, and there’s nowt wrong with me.”

The stench of week-old burnt oil filled my nostrils.

The place will be bouncing within the hour.

I order a black tea and can’t wait to get the hell out of Dodge.

You see, I have a bucket list goal to be a centenarian, but making the grade isn’t good enough. I want to be fighting fit. I don’t want some paid hand to be rubbing my balls, and wiping my arse (well, at least part of that equation feels slightly intrusive).

I want to walk down the street without the aid of a skulled-topped cane.

I don’t want to take a shit in a commode.

And so I need to do everything I can NOW to enable me to reach my goal, and that means not sitting on tables in cafes that break my back, not ordering the Full Monty, and not getting into fatal scraps with the regulars who have squatters rights on these corner tables.

I once wrote an article describing how poker saved my life when I divorced alcohol. Earlier this week, a BBC documentary got me thinking about a way that poker could lengthen my life.

Drinkers Like Me is a documentary where TV presenter, Adrian Chiles wrestles with the cognitive dissonance of his drinking habit, and how ‘normal’ it seemed in his world to drink more than 100 units per week, against the NHS advice to not exceed 14.

Throughout the documentary, Chiles continually asked the question, “Am I an alcoholic?” The real question he should have been asking is, “Why does this feel so natural?”

To help him he turned to his father.

It seems Senior Chiles once had a problem with alcohol, and the quack told him to stop or face dire consequences. He didn’t stop completely, but he hardly touches the stuff.

“How does it feel?” Asked Chiles the Younger.

I looked at him and thought, “I can’t imagine you heading off to watch a spot of pole dancing, or taking part in 10-mile hikes through the Pennines, or go-kart racing, or sober raves, or a spot of yoga, or heading to the movies, or any manner of things that would cure his boredom.

Nope, my thin slice of the man was one who would sit at home reading the paper, watching crap on TV, tending to his roses, and then hitting the sack at 5 pm, waiting for his life to end.

And if you do live life as described (and I must emphasise I am purely guessing that Senior Chiles lives this life, tongue in cheek), then you’re going to have a problem on your hands, and it’s called Alzheimer’s Disease.

Can I Die of Something Else Please?

My interest in Alzheimer’s emerged after reading Terry Pratchett’s A Slip of the Keyboard, in which he shares his insights on how it felt to have the early signs of the disease.

According to data gleaned from Alzheimersprevention.org, more than 5.4 million people have Alzheimer’s in the USA. Doctors diagnose another sufferer every 68-seconds, making it the sixth leading cause of death in the US.

From what I gather, genetics play a significant role in the emergence of the disease (so it’s your parents’ fault), but there is a new school of thought that Alzheimer’s can be kept at bay if we can make the necessary changes in our lifestyle.

One proactive measure is exercise; not only physical but mental.

How do you exercise the mind?

Immerse yourself in thought-problems that stretch your cognitive capabilities. Another significant change is to socialise more, and this is where poker and other mind sports come in, particularly sports/games where you play live.

In 2017, a group of researchers at the University of Montreal conducted trials to see how playing Super Mario 64 would increase hippocampal grey matter in older adults.

The grey matter in this part of the brain is neurological tissue critical for the promotion of construction of memory, the absence of which is one of the primary factors with many psychiatric diseases, such as Alzheimer’s.

The research team selected 33 people aged between 55 and 75 and divided them into three test groups. The first played Super Mario 64. The second sat at home scratching their balls. The third learned to play the piano by the aid of a computer.

At the end of the six-month trials, the results revealed only the Super Mario group saw the increased grey matter in the hippocampus. The group that stayed at home watching Emmerdale Farm and reading The Sun showed a significant grey matter loss, and the piano players showed growth in grey matter in the cerebellum, linked to motor movements and short-term memory.

And this got me wondering, what if we didn’t have a Nintendo, but instead had a poker table?

Why My Granny Should Play Poker

Ask anyone that works at the World Series of Poker (WSOP) year-in-year-out, and they will tell you that the three events that seem to radiate the most joy, love and laughter are the Seniors, Super Seniors and Ladies events.

Poker Hall of Famer, Mike Sexton, joked that the competition in the senior’s events is getting so tough, the WSOP should consider putting on a third event.

Hey @WSOP – I couldn’t beat the Seniors or Super Seniors. Any chance of a Dinosoar Seniors (70+)? Maybe if my opponents can’t see, can’t hear, can’t remember what beats what & possibly be too tired to show up for Day 2, I might have a chance! #wsop #needhelp #dinosoarseniors

And about that ladies events.

Outside of the Ladies Event, female poker players only make up 3.8% of the WSOP Main Event field, and that’s a tragedy because according to Alzheimersprevention.org, two-thirds of Americans with Alzheimer’s disease are women.

I’m sending her to Vegas.

Doyle Brunson is still competing with the best in the business aged 85. Septuagenarian Pierre Neuville made the November Nine in 2015 finishing seventh for $1.2m. And in a beautiful story recently, John Mokhhtari won a $30,000 Platinum Pass to compete in the $25,000 buy-in PokerStars’ Player’s No-Limit Hold’em Championship (PSPC), beating 1,072 entrants at a live event in Lucky Chances, in his 70s.

The beauty of poker is that it removes the physical constraints that often prevent the elderly from competing in other sports/games. While one assumes that the mind’s capability deteriorates over time, Brunson, Neuville, et al., prove that if you can follow the advice laid out by the likes of Alzheimersprevention.org, or get plain lucky, then you can still compete with the best heading into the twilight of your life.

And let’s not lose the critical point here.

We shouldn’t wait until we reach our 60s and 70s to change our lifestyle in a bid to set a blowtorch to the shadow of Alzheimer’s. We should begin acting NOW.

Don’t order the Full Monty, and instead move towards a more Mediterranean diet.

Stop reading the local rag, and pick up books like The Blue Zones by Dan Buettner, providing the blueprint to becoming a centenarian, taken from data gleaned from across the globe.

Get off your arse.

Learn new things, like how to beat the game of poker.

Get around the poker table, and socialise.

Bend, stretch and become a contortionist.

Meditate or be more mindful.

Next week, my daughter goes to Montessori School. The founder of the Cardiff branch is creating a new school for people who have Dementia and Alzheimer’s, and cognitive play will be an essential part of the curriculum.

In Jordan Peterson’s book 12-Rules For Life: An Antidote to Chaos he suggests that the search for happiness is not the core reason for our existence, and instead, it’s our Franklesque search for meaning that’s driving us.

So I would like to throw in, that it helps, no matter how old you are, to have something worth living for.

Just as in poker.

Maybe the way to beat Alzheimer’s is to get lucky.

This year, Koku Istambulova from Chechnya, a federal subject of Russia, will reach the ripe old age of 129, and according to existing records that makes her the oldest person in the world.

So what’s her secret sauce?

Should we send Dan Buettner to her home armed with a notepad and a pen?

‘I have not had a single happy day in my life,” Istambulova told reporters. “I have always worked hard, digging in the garden. I am tired. Long life is not at all God’s gift for me – but a punishment.’