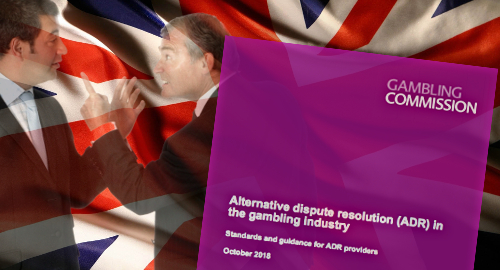 The UK’s gambling regulator has issued a new set of rules under which third-parties are to handle disputes between gambling operators and consumers.

On Monday, the UK Gambling Commission (UKGC) published new standards for alternative dispute resolution (ADR) providers, as part of the regulator’s ongoing commitment to ensuring that its licensees treat consumers fairly. The new rules will take effect from October 31.

Since 2015, the UKGC has been tasked with approving ADR providers to ensure consumers have somewhere to turn when disputes with gambling operators prove irreconcilable. In January, the UKGC put its licensees on notice that they would only have an eight-week window in which to resolve complaints before having to involve an ADR provider.

Among the changes to the existing ADR rules are requiring providers to ensure consumers are aware that they have a right to request the “arguments, evidence, documents and facts put forward by the other party” to the dispute.

With regards to an ADR provider awarding compensation (rather than mere reimbursement) to a consumer, the provider is instructed to recognize the “emotional or practical impact on the consumer, rather than punishing the business.”

The UKGC clarifies that this determination can include whether the dispute caused the consumer “stress or physical or mental suffering.” A provider may also consider “inconvenience” in effort or time caused by the dispute, and whether or not the dispute did “damage to a consumer’s reputation.”

The UKGC cautions that “in most cases” compensation won’t be awarded, but could be warranted if the business’s actions had “a considerable effect” on the consumer. The UKGC also notes that different amounts of compensation may be awarded for the same transgression, depending on “all the circumstances of the case.”

In keeping with the UK Ombudsman Association’s six principles of good governance, the UKGC expects each ADR provider to “be transparent about and make public information on how it is funded, and how it is independent.”

Further to that last point, if ADR officials work part-time for the provider and part-time in another capacity, say, as a gambling industry trade association official, the ADR provider “must ensure that the official is not conflicted by their non-ADR duties.” Conflicts of this nature must be reported and, wherever possible, the ADR provider should propose that the complaint be transferred to a non-conflicted provider.

ADR providers must also publish performance data on how many disputes they receive, the number of disputes refused, the average time taken to handle disputes, and percentages on whether disputes were resolved in favor of the customer, the operator or by mutual agreement.

There are also strict timelines for providers to respond to a consumer’s complaint (three working days) and for providing updates to consumers regarding ongoing complaints (every 30 days). ADR websites must also contain info on how to submit complaints about the provider’s own performance.

The UKGC has been pressing its licensees to offer greater protections to problem gamblers, and ADR providers must now also consider whether the language used by a consumer “indicates that they might be vulnerable or need additional support to understand the ADR process.”

Finally, ADR providers will also have to share a variety of info they collect with the UKGC for the purpose of identifying “emerging trends or themes” in gambling activity and to allow the UKGC to monitor for potential regulatory breaches by its licensees.