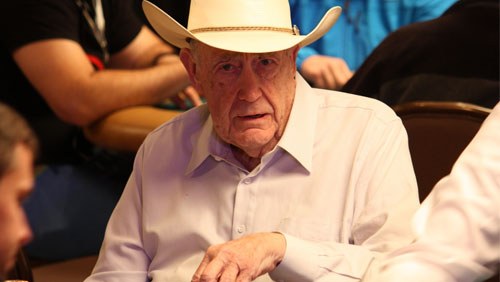 It’s 1978, and a poker player thought it would be a good idea to create a book containing his most exclusive poker secrets. I’m sure his peers met his decision with derision. The idea to share your thoughts in return for a long-term profit was unheard of back then. Insane. Yes, that’s the aptest word.

And the man’s name?

It’s been an interesting summer, for the 10-time World Series of Poker (WSOP) champion and Poker Hall of Fame member. At the age of 84, and his heart pulled towards the cash game action in Bobby’s Room, the fans don’t expect to see Brunson at the WSOP, but he made an impromptu experience in the $10,000 No-Limit 2-7 Lowball Draw Championship, finishing sixth in what he vowed would be his final appearance at the iconic poker festival.

Brunson’s appearance in that final table coincided with a slip of the tongue, with Texas Dolly telling Remko Rinkema in an interview that he planned to retire to spend more time with his wife. Brunson later retracted that statement, explaining that he would end his association with the WSOP, but would continue to play in some capacity as long as his body was physically able to compete.

Doyle and his son Todd have announced on social media the launch of the Brunson Poker Pro Training Course.

It’s an online experience that will cost you $149, and for that amount, you receive a training book, audio CDs, hand charts, and access to additional training course material.

The pair has 11 WSOP bracelets and $10.5m in live tournament earnings between them, and that’s not considering the millions the couple have undoubtedly won playing live cash games during their lifetime.

If you consider that people still get value from Super System (I recently polled 58 poker players to name their most influential poker book, and Doyle’s masterpiece came second to Harrington on Hold’em), $149 is a steal.

“I hope the training site will be as helpful as the first ‘Super/System’ book was to players,” Doyle told PokerNews. “That’s some big shoes to fill, but it has to improve people in different areas of poker.”

The training program promises to cover:

The Brunson family isn’t the only force putting out top-notch training content this summer. You may remember we covered Daniel Negreanu‘s decision to team up with MasterClass to create a similar program valued at $90.

As in 1978, when Doyle Brunson received a few knocks for selling his secrets, so did Negreanu, and his most prominent critic was – Doyle Brunson.

Daniel…you are the best tournament player in the world. Why are you educating people? Don't make the same mistake I did with S/S. I justify my teaching that it created lots of new players that we sorely need. Today there are plenty of players…just saying. https://t.co/nxx840bFiA

“Don’t make the same mistake I did,” said Doyle.

The only mistake would not be shelling out the $149 for the course if you want to improve your poker game.