Marathonbet is the new main sponsor of Girona FC

The club from Montilivi have announced a multi-year contract with the global betting company, Marathonbet, and will wear its logo on the front of the first team shirt. 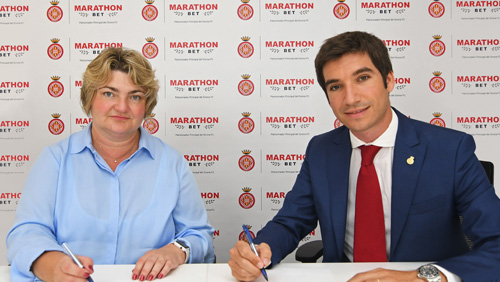 Marathonbet is the new main sponsor of Girona FC in a multi-year relationship that begins this season.

The Catalan club will be wearing the Marathonbet logo on the front of the first team’s kit– released tomorrow – and will also have a wide presence inside the Montilivi Stadium through various branding.

The new main sponsor of Girona is a leading global bookmaker with more than 20 years of experience in the sector. Excellent odds,a wide range of bets and live markets are hallmarks of the bookmaker, who also have sponsorship agreements with clubs including Manchester City, Moscow Dynamo and Hibernian FC.

The CEO of Girona FC, Ignasi Mas-Bagà, said:“Our agreement with Marathonbet is highly strategic. With this link we have fulfilled our objective of establishing an alliance with a renowned and prestigious company.” Mas-Bagà stressed that:“Marathonbet will be our first main sponsor since winning promotion to La Liga, so this is a real milestone for the club. We intend to create a close, long-term relationship so that both entities can continue to grow together “.

Natalia Zavodnik, CEO of Marathonbet, said: “We’re really excited to announce this partnership with Girona FC, one of the emerging forces in Spanish football in recent years. The club are coming off a very impressive debut season in La Liga and we can’t wait to see how the next few seasons unfold at EstadiMontilivi.”

Natalia Zavodnik added: “Marathonbet and Girona share a similar story in recent years with our emergence in the Spanish market mirroring their rise to prominence since promotion to La Liga in 2017”.

To celebrate the partnership, Marathonbet will be offering some of the best odds on the marketto fans of Girona FCto bet on Los Rojiblancos at the beginning of the 2018-19 season.

Girona FC is a professional football club founded in 1930 that plays in the First Division after achieving promotion in 2017, after nine seasons in the Second Division.

Girona FC are about to play their second season in the top flight of Spanish football, after a first season that exceeded all expectations. Under the guidance of Pablo Machín, the team played attractive football and came close to qualifying for European football.

Now, Eusebio Sacristán will take the reins after spells managing Celta de Vigo, Barcelona B and Real Sociedadamong others.

Established in 1997, Marathonbet offers pre-match and live betting markets across a range of sports/events through its online sportsbook. Casino, Live Casino and now Bingo are also available.

Today, thousands of people enjoy Marathonbet and its huge selection of bets with various markets, including: football, basketball, tennis, motor and more.