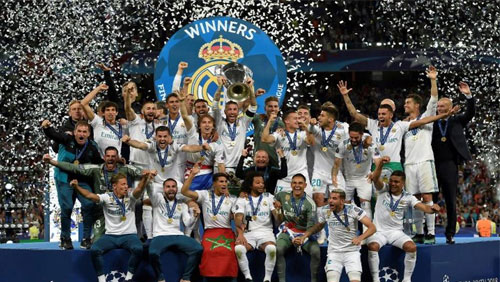 Zinedine Zidane joined Bob Paisley and Carlo Ancelotti as the only manager to win three Champions League/European Cups, and nobody noticed such was the magnificence of extraordinariness that greeted Liverpool and Real Madrid at both ends of the spectrum last night.

Google ‘Champions League Final’ and one name emerges above all others.

It was the night the 24-year-old German goalkeeper saw his career in the top flight end after two incomprehensible howlers gifted Madrid crucial goals in a 3-1 win that saw the Spanish side win Europe’s elite competition for the third time in a row.

How else do we grow?

But if you’re a goalkeeper, the reverse is true. You don’t learn from your mistakes, they bury you, and if you make them in front of 360 million viewers worldwide, there is no hope of resurrection.

For the first time in Champions League history, Real Madrid fielded the same winning lineup from the year previous. Liverpool began with 11-players, none of which had ever graced a field under such circumstances.

The only question for the bookies was whether the Madrid defence could stop Liverpool’s front free from causing havoc. Sergio Ramos solved that problem with a crunching challenge on Mohamed Salah that saw him limp off in tears on the 30-minute mark with a suspected dislocated shoulder.

Moments before Salah left the field, Karius pulled off a magnificent save from a Cristiano Ronaldo close-range header, only to see Karim Benzema put in the rebound. Fortunately, for Liverpool the linesman was on point, disallowing the goal for a Ronaldo offside.

But Benzema would still grab the glory of scoring the opening goal after a stunning howler from Karius. In a moment that felt as safe as houses, Karius picked up the ball on the edge of his box and inexplicably threw the ball into Benzema’s leg, which then trickled into the goal.

The keeper’s blushes were redder than the Liverpool end.

Fortunately, Liverpool was level within four minutes. Dejan Lovren headed a corner towards goal, and Sadio Mane pounced from close range to equalise for the Red in the 5th minute.

And then came a moment of brilliance that would have graced the headlines of any event had it not been for the much-maligned Karius. Zidane threw Gareth Bale onto the pitch, and four minutes later, the Welshman connected with a Marcelo cross to shoot a bicycle kick into the top corner of the Liverpool net. It was a moment of utter brilliance and maybe added a few million onto his summer price tag, as he considers a future away from the Bernabeu.

Liverpool poured forward in search of an equaliser until Karius once again knocked the puff out of his own side with Howler #2. Bale picked up the ball on the right and unleashed a speculative long-range effort that Karius fumbled into the net leaving Liverpool with no hope.

“Now he has to deal with it,” Klopp told the press after being pressed on his keeper’s mistakes, “We will be with him, there’s no doubt about that. It was not his night obviously.”

Real Madrid has now won an incredible 13 Champions League /European Cups, four in the past five seasons, and three on the tamp. With Madrid finishing third in La Liga, 17 points behind Barcelona, it was a win that means Zidane will stay at the helm for at least another year.

And the other two headline acts?

Gareth Bale will almost certainly leave Madrid in the summer, with Man Utd his likely home.

Kids, when you’re playing with jumpers for goalposts and your mates suggest you should go in goal, make every excuse not to.