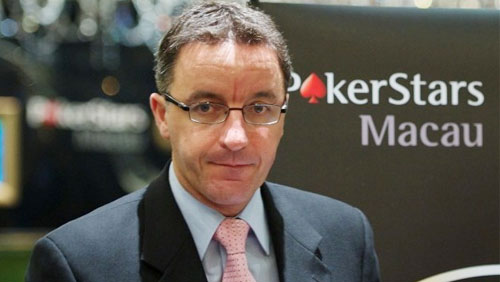 
I read recently that the human mind acts as an iPod, storing memories like the white flash of brilliance stores songs.

How many memories does a mind hold?

Google says the human memory has a storage capacity equal to 2.5 petabytes (a million gigabytes).

That’s a lot of sad and happy times locked away in the dark vaults of our subconscious, so why is my jukebox choosing this song at random?

I am in Junior School, playing football in the yard. I fart and follow through. Red-faced, and brown bummed, I walk gently to the teacher’s office and as she sees my posture, and asks what’s wrong? I burst into tears.

It seems the more emotionally charged your memory, the more likely it is to float to the surface unexpectedly.

I assume Danny McDonagh is a man with more than his fair share of highly emotive memories. In 2016, McDonagh resigned from his position as Director of Live Events for PokerStars, to take a planned sabbatical that included spending time with his mother, teaching children English in Cambodia, and running a marathon under the blazing Vegas heat.

And it was during his time in Vegas when a chance meeting with the World Poker Tour’s (WPT) Angelica Hael left McDonagh with a new position at the WPT’s Live Events Specialist, focusing on growing the brand in the Asian-Pacific regions.

At that time, I reached out to McDonagh via the WPT for an interview. I got the thumbs up. Unlike that time in the schoolyard, I never followed through. I won’t be making the same mistake twice.

It’s time that PokerStars had some stability around its live tournament offering, and maybe McDonagh is the man to steady the ship.

This morning, a press release sandwiched between a blog post from Steve Pavlina on the Hero’s Journey, and a note from the Universe, announced that Danny McDonagh would be returning to PokerStars in the capacity of  Executive Tournament Director for PokerStars Live.

Working for PokerStars in any capacity is a joy, but when it comes to getting your hands dirty in the live realm, there is only one place anyone wants to be – the European Poker Tour (EPT). 20-years since McDonagh made his debut as the Tournament Director for the poker room at the Crown Melbourne; he has finally landed the top job.

McDonagh will leave the hands-on TD work to Toby Stone and his crew. Instead, McDonagh will be involved in the constant tweaking and twerking of tournament rules and regulation, schedules and structures. More importantly, McDonagh will act as a conduit to the players, speaking with them at live events, and through the interwebs via social media channels.

“The challenge as I see it is to lift the bar to new heights and deliver even more for the players, making them {EPT events} not to be missed events for any poker player. I intend to give it my best to help Toby and his team achieve this objective,” McDonagh told PokerStars’ Stephen Bartley in an interview.

A Sea of Change

PokerStars resurrected the EPT brand after the disastrous decision to rebrand as the PokerStars Championship failed to gain traction, allowing partypoker LIVE to increase market share with their MILLIONS brand.

Soloveychik wasted no time finding a new position, turning up with the esports betting platform Luckbox.

McDonagh’s appointment comes as a critical time for PokerStars. While the consistent message from PokerStars Towers is to celebrate partypoker’s recent resurgence in the live realm as a good thing for poker, there has to be one eye narrowing in on the incredible number of amateur and professional players that have swarmed to the MILLIONS brand in the past 12-months.

McDonagh will be putting on his new suit for the first time at EPT Barcelona in August. If you miss him, you can catch him at EPT Prague at the end of December, or the PokerStars’ Player’s No-Limit Holdem Championship in the Bahamas in January.

In the meantime, I’m off to the loo.

Business calls, and I’m not in junior school these days.