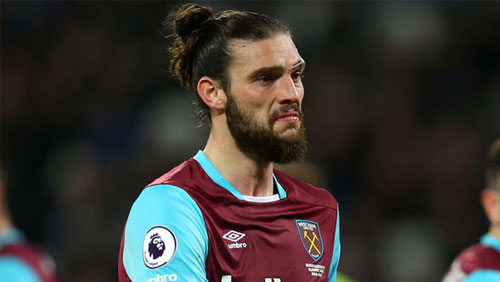 We finish our round-up of Week 34 of the English Premier League with the dirtiest game in the league’s history as West Ham, and Stoke played out a 1-1 draw containing 36 fouls.


My boy doesn’t know what to do with his life. He’s at that age, where a boy becomes a man, and you have to put down your joystick and pick up a pen, soldering iron or a hammer.

Like most people aged 17, he wants one of those cushy jobs, the ones where you can sit on your arse all day, being paid millions for doing nothing. I was telling him that there aren’t a lot of jobs like that in the world.

“What about Andy Caroll?” He said.

There was a twinkle in his eye.

Maybe he should try and be a comedian?

The West Ham striker is on £80,000 per week, plus bonuses, and let’s be honest, in the past five seasons, he has been sitting on his arse all day being paid millions for doing nothing.

But on Monday night, Caroll came off the bench to score a last-minute equaliser that pushes West Ham seven points clear of relegation and five points closer to the golden 40-point mark that David Moyes believes he needs to be as safe as the female lead in a Japanese monster movie.

Carroll, who has only appeared in 138 Premier League Matches in 13 seasons (36%) got on the end of an Aaron Cresswell cross to score with a volley, four minutes after coming off the bench. It was the striker’s first appearance since January.

Paul Lambert and the Stoke team would have been happy with a point before the match, but to lose two in such dramatic fashion will be a difficult pill to swallow.

The Stoke board brought Lambert into the fold to replace Mark Hughes In January, but the Scot has only managed to win one of his eleven games in charge, proving that Hughes wasn’t exactly working with a team of darlings.

One man who said at the time that the team had not performed for Hughes was Peter Crouch (another lanky striker who spends more time on the bench than the old woman in Thompson Park who feeds the pigeons). It was Crouchy who put Stoke ahead in the 79th minute after Joe Hart had fumbled Xherdan Shaqiri’s shot. It was Crouch’s 44th Premier League goal for Stoke, a new club record.

And it could have been worse.

Javier Hernandez thought he had scored an injury-time winner, but referee Michael Oliver disallowed it because of an Andy Carroll handball in the build-up. It was a tough game for Oliver in the wake of the Champions League shenanigans that led to Italian fans abusing his wife on Twitter. The man in the middle had to disallow three West Ham goals (correctly) in a match that set a new Premier League record with 36 fouls.

Where do they come from?

Burnley, Crystal Palace and Swansea it is then.