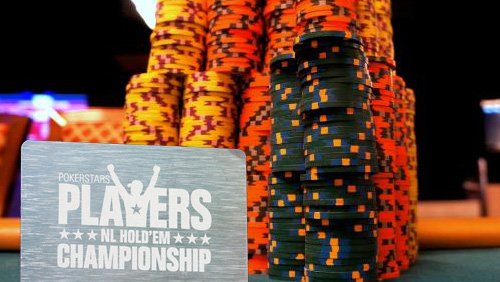 
Women breastfeed. Men pretend not to stare, Children just stare. The line for the drug that’s not a drug spills into the outside world where British Summer Time has announced itself to the world by allowing the sun to play outside for one day.  And somewhere in a snazzy poker room in Macau, three people have just won the opportunity to compete in the Bahamas for millions of dollars.

Oh, how the other half lives.

The resurrection of the Asia-Pacific Poker Tour (APPT) is final. Three people have earned a $30,000 Platinum Pass for the 2019 PokerStars’ Player’s No-Limit Hold’em Championship (PSPC).

We’ll begin with the HKD 40,000 (USD 5,000) buy-in Main Event. The woman sitting next to me keeps saying, “I love it. I fucking love it.” She’s talking about mashed potato, but I have a feeling Lin Wiu is repeating the same mantra inside the privacy of his grey matter after beating Aditya Agarwal in heads-up action to take the APPT Main Event title, $394,558 in prize money and the $30k Platinum Pass.

The event attracted 356 entrants and HKD 12,984,032 (USD 1,655,365) in prize money. The final table of eight including the former APPT HKD 250k High Roller winner Phanlert Sukonthachartnant, the multiple European Poker Tour (EPT) side event champion Maxi Lehmanski, and one of the world’s greatest in Poker Hall of Famer John Juanda. The best that quartet could do was a fourth-place finish for the man with the longest name in the history of the game.

Lin Wiu and Aditya Agarwal would play heads-up for the title and Platinum Pass. The APPT wasn’t the only mass of energy jumping to the beat of the Stone Roses I Am The Resurrection this weekend. The PokerStars Team Pro, Agarwal, began with a 7.4m v 3.2m chip lead and was one card away from winning the lot when he reached the river holding broadway – AK v A9 until a king on the river gave the pair a split pot. The man from India never recovered. Wiu went on to take the title after his A4 found an ace in the window versus Agarwal’s snowmen.

Other top pros whose phone was ringing off the hook in this one were Davidi Kitai (9th), Pete Chen (12th) and Kosei Ichinose (25th).

Chen beat Xin Fan in heads-up action. Fan won the HK 100,000 High Roller the last time the APPT held one in the City of Dreams. Chen began with a 7m to 2.75m chip lead, and there was a minimum of fuss in the final action.

The US Poker Open Champion, Stephen Chidwick, finished third, the HK 80,000 APPT High Roller champ, Kristen Bicknell finished fourth, and Dominik Nitsche finished eighth fresh off a fourth-place finish in the Super High Roller Bowl China where he won $1.6m. Justin Bonomo, the winner of that event for $4.8m, bubbled the final table in this one.

Joining those two titans in the Bahamas is a recreational player called Jian Chen. After playing his first poker tournament 15-months ago, Chen defeated 494 entrants to take the HK 575,500 (USD 73,372) first prize and Platinum Pass after winning the APPT Macau Asia Open.