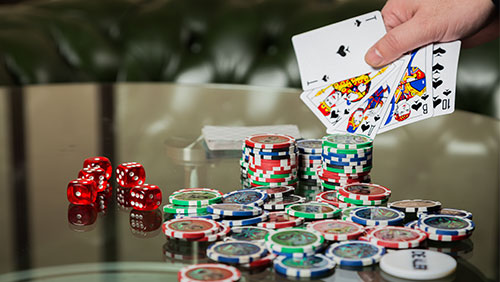 After Lee Davy read that the Intel Extreme Masters esports event in Katowice had to make room for 900 journalists, he reminisces about his time in the live poker tournament pressrooms.

I love the sound of high heels tapping on the floor.

It’s like a Lesser-Spotted woodpecker making her home in the wood. I used to be an amateur ornithologist, hence the cocky use of the form of pecker. I also put my hand in a woodpecker’s nest once. The peckers had fled. A bee had moved in. Prick. I fell out of the tree and banged my head. I was out cold. When I came too, my finger was throbbing, and all I could think about was the dead bee lying in a peckers nest. What a way to go.

I drift into a memory of Amnéville. It sounds like a horror movie, and in many ways it was. I don’t know what the World Poker Tour (WPT) was doing there. But I followed them. I followed them everywhere back then. If I didn’t have a live gig a month, I couldn’t pay the rent, and we would have to eat pickled beetroot on toast for tea.

The event took place in a desolate holiday resort. There was hardly anyone there. It was apparently out of season, but a few people turned up to skate in the rink and eat dodgy looking pizza. I remember, how I kept thinking why anyone would go there, in the same way, I wonder why we, in the UK, put our washing outside on a line in the drizzle, and Californians use a drying machine.

It was Barry Carter who told me to get into Live Tournament reporting. I’m paraphrasing, but Bazza said that it was a good way for a poker writer to make a chunk of change, but it was also the hardest gig in the business.

For one, I wasn’t a writer, and for two I came from 19-years hard graft on the railroads (ok, one year where I did fuck all as a British Rail employee and 18-years hard graft in the private sector). So when I arrived at my first few gigs, I didn’t understand what Bazza was talking about, it was a doddle.

I walked around the tournament floor with the mood of a man who had spent the evening in the presence of his argumentative lady flicking the light switch on and off because I told her to stop. I was a man in a foul mood. If someone had offered to lick my balls, I would have found an excuse to say no.

I would arrive at a venue and ask, “Where am I working?”

Incredible, how many casinos realised there were writers at the event only when I turned up with my rucksack full of stolen breakfast from the hotel.

And then more of us would turn up.

I felt sorry for the person holding the camera.

They never got a seat.

When we did get a chair, it would grate your ass-bone. The table was always wonky. The height was all wrong. A backache I have today is because of those 12-15 hour shifts sitting in ass-breaking chairs, staring down at a laptop on the devil’s bed.

And don’t get me started about the plug points. I was one of the idiots who turned up with a universal adaptor that took the space of three sockets. There was never enough power sockets. The Internet never worked. We were lucky if we got a free bread roll.

At least in Amnéville, we got free Red Bull.

I drunk gallons of the stuff.

I was off my tits.

I remember the final table well.

They positioned it in the centre of the room. There was a shot of the action beamed to the wall at the back. The nearest plug point was in Switzerland. I had to cover hand-for-hand action alone.

I managed to convince the casino staff at the last minute to find five extension leads that I plugged together to reach my table. It was a tiny thing, and the worst chair you could imagine. To help with my neck, I balanced my laptop atop a stack of poker magazines. I couldn’t see the action on the back wall because a giant WPT poster was in my way.

I will always remember the tap, tap, tap of Nesrine Kourdourli’s heels. Now Nesrine Reilly. That sound made everything else palatable. That and the Red Bull.

This morning, as I sit in a butt-crunching chair staring down at my laptop resting on a wonky table in Coffee One, I am reading about the Intel Extreme Masters (IEM) in Katowice, and how the press room contained more than 900 journalists from all parts of the world.

There are many reasons esports is making poker the stuntman.

I am sure that taking care of 900 journalists is NOT one of them.

But I had to write about something.

The news is so quiet this morning the tap, tap, tap is roaring in my lughole.