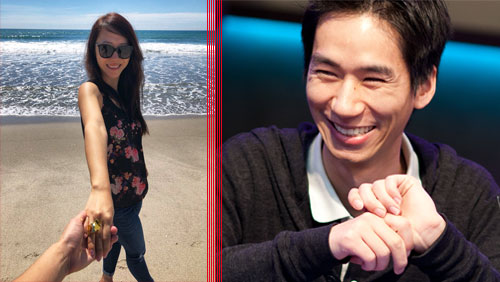 It’s a match made in heaven. Or, at least in Macau.

Two PokerStars pro players took to Twitter on Tuesday to announce their engagement. Randy Lew and Celina Lin, who have been dating since 2016, decided to tie the knot and are happily exploring venues for the big day.

The two met in Macau during the Asia Pacific Poker Tour (APPT) Macau tournament in 2010, but didn’t start dating until two years ago when they were attending the DreamHack eSports tournament in Sweden. Lin interviewed the up-and-coming poker pro at the APPT Macau event and admitted that she had no idea at the time who he was, or that he had already pocketed more than $1 million in online action. Lin’s revelation undoubtedly stung Lew’s ego a bit, but he obviously got over it.

Lew, who calls California home, didn’t just get down on one knee and pop the big question—Lin had to work for it. She was given a series of clues the day of the proposal that led her to the couple’s favorite beach in Te Ranga, Papamoa. It was there that the final riddle had Lin digging in the sand.  Once she uncovered the box and opened it, she found a note that read, “Will you marry?” along with a ring. An initial response of, “What the hell? No way!” certainly must have sent Lew reeling. However, Lin realized that he was serious and agreed to marry him. Since getting married by Elvis in Las Vegas would be too cliché, the couple is considering a beach wedding, possibly somewhere around Melbourne, Australia.

Both Lew and Lin have earned their places in the poker world. Lew, on top of his online earnings, has picked up over $1.2 million in live action. His largest win came at the APPT Macau NLHE Main Event the year after the two met. He took first place and a purse of a little more than $484,000. Not too far behind is Lin, who has earned almost $940,000 in live tournament play since her first win in 2007. Her best win came in 2012 at the Macau Poker Cup when she won a little more than $110,000 for her first-place finish.