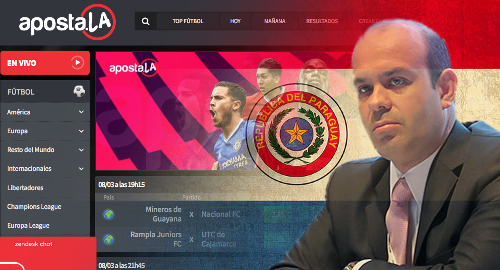 The head of Paraguay’s gambling regulatory body has resigned amidst a growing controversy over the awarding of a monopoly sports betting concession to a politically connected company.

On Wednesday, Javier Balbuena announced that he was stepping down after more than four years as president of the National Commission of Games of Chance (Conajzar). Basilio ‘Bachi’ Núñez has been named Balbuena’s successor.

Balbuena (pictured) used his personal social media accounts to inform the nation that he was retiring “with the conviction of having fulfilled my duties and having laid firm foundations for the orderly development of the field.” Balbuena insisted that the decision to step down was “100%” his own, although not everyone sees things in such absolute terms.

Balbuena was increasingly under fire for last December’s decision to award the country’s monopoly sports betting concession to Daruma Sam SA, a local firm that operates under the Aposta.la brand. Daruma’s president is reportedly close friends with a key adviser to Paraguay’s President Horacio Cartes.

The decision was challenged by the country’s Office of the Comptroller General of the Republic (CGR), which claimed to have identified “irregularities” in the bidding process. Last month, the CGR ruled that the contract with Daruma Sam, which had yet to be signed, must be revoked.

However, President Cartes appears to have attempted to head CGR off at the pass by signing a decree approving the contract just one day prior to the CGR issuing its ultimatum to Conajzar. Ilse González, the CGR’s director of public contracting, nonetheless insisted that Conajzar had no choice but to comply with its revocation order. Balbuena reportedly planned to respond to the CGR’s demand within two weeks but apparently he found the ‘eject’ button before he found the appropriate response.

Among the companies rooting for the CGR to prevail are all the other Paraguyan firms that offer sports betting to local punters, but which stand to have their betting businesses curtailed via the government’s decree. The CGR has suggested the betting monopoly plan presents a “constitutionally incompatible issue.”