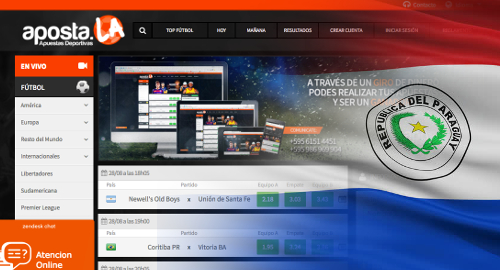 Paraguay is reportedly planning to shake up its sports betting industry by reducing its current seven licensed operators down to just one.

Last week, RDN.com reported that Paraguay’s National Gaming Commission (Conjazar) is preparing a Highlander-style ‘there can be only one’ showdown by forcing the country’s existing seven sports betting operators to compete for a single monopoly concession.

According to Conjazar, the majority of the seven betting operators have been operating under provisional licenses granted by the executive branch a year-and-a-half ago, although one operator – Daruma Sam S.A., which operates under the Aposta.la brand (although that brand is the subject of a trademark dispute with another provisional licensee) – has been conducting retail and online wagering operations in Paraguay since 2014, which may or may not give it the edge in the bidding war to come.

Conjazar justified its decision to streamline the country’s betting sector as a means of boosting the government’s tax take. The government of this country of less than 7m people currently charges operators 4% of their betting revenue, but this results in the state only collecting about $140k per month. The prevailing theory is that a single operator will be willing to pay a higher rate if the government eliminates their competition.

Conjazar president Javier Balbuena later told radio broadcaster 1080 AM that the tender for the betting concession would get under way in a few months. In the meantime, Conjazar intends to mount a campaign to close sports betting operators that are operating under permits issued by local municipalities but which haven’t received authorization from the national regulator.

Paraguyan legislators are currently mulling Law 1016/97, which would see Conjazar establish itself as separate from the Ministry of Finance, and Balbuena says the increased tax take from the betting concession would help the newly independent regulator fund its operations. Conjazar currently has only around 20 staff members who share just two vehicles, and Balbuena said this is insufficient to maintain proper oversight of the local industry.

In addition, Balbuena claimed that the shift from land-based to online gambling has required Conjazar to blow a good chunk of its current budget on hiring outside consultants in order to understand the shifting gaming landscape.

There are reportedly five brick-and-mortar casinos in Paraguay, also operating under provisional licenses. But Balbuena complained that “we do not even know, officially, how many casinos there are in [capital city] Asunción, nor how much they charge.” Balbuena said the new law, and its promise of extra financial resources, “will allow us to capture those revenues that are lost in the municipalities today.”