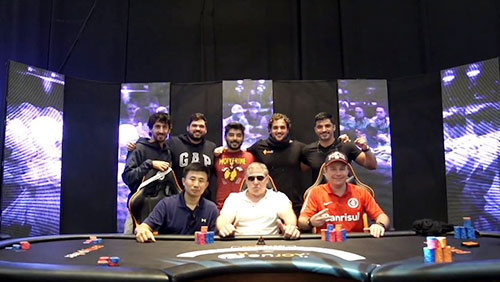 partypoker has successfully held their first Latin American Poker Championships after 1,137 entrants meeting the $1m Guarantee in Uruguay and a Brazilian Olympian ditches volleyball for poker.

With the sirens of the emergency services heading to partypoker’s online servers wailing in our ears, the brand got back to what they’re great at – operating a successful live tournament.

partypoker (minus the LIVE and MILLIONS monikers) erected a few thermometers in the Enjoy Conrad Resort & Casino in Punta Del Este, and the results were boiling.

The $1,1000 Latin American Poker Championships attracted 1,137 entrants, ensuring partypoker soundly beat the $1m guarantee. If it was an experiment, it was a success. The Uruguayans seem to like poker as much as Enzo Francescoli.

The Brazilians dominated the final table with five of the eight hailing from the land of Neymar Jr (only one came from Uruguay), and one of them won it – Amauri Grutka winning the $200,000 first prize. It was Grutka’s best performance since finishing third in the Brazilian Series of Poker (BSOP) Main Event for $41,649, back in 2013.

However, I can’t eat my mushroom burger and salad without mentioning the exploits of Joao Simao. Since partypoker adopted the Brazilian star, he’s been making poker seem as simple as shaving that inconvenient hair from the stump of your lady’s chin.

This side of Christmas, Simao has finished second and fourth in consecutive €25k High Rollers in Rozvadov, fourth in the MILLIONS Main Event at the same venue, knocked his wife out of the Latin American Poker Championship High Roller en route to a second-place finish, and now fourth in this.

A mice nibbling on pieces of cheese he is not.

If partypoker is looking to hire more South American ambassadors, then look no further than Rodrigo Santana.

And I thought they were only good at football.

I wonder if women watch volleyball and stare at the men’s arses?

After competing for 13-years, Santana decided to pursue a career as a professional poker player. The Olympian told volleymob.com that there are a lot of similarities between poker and volleyball, although I think you can apply his response of you have to study hard to beat your opponent from anything from archery to zit squeezing. Let’s hope he is a beast in the cash games. According to Hendon Mob his only cash was in 2015 where he earned $276.

Who the hell cares.