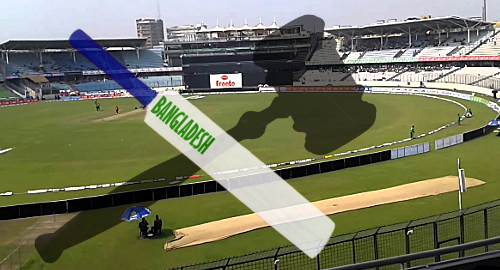 On Sunday, Bangladesh Cricket Board (BCB) CEO Nizamuddin Chowdhury announced that special courts would be set up at venues hosting this month’s tri-nation series with Sri Lanka and Zimbabwe. The courts intend to “instantly” punish anyone in the stadiums who is caught betting on the cricket action.

Describing betting as “a public nuisance,” Chowdhury noted that 77 spectators – 12 of them foreigners – had been ejected from last year’s Bangladesh Premier League (BPL) Twenty20 tournament after being caught wagering on the event via their mobile phones.

While the new special courts will make their debut at the tri-nation series, they will remain in place during the Sri Lankan team’s tour of the country that follows the series. Depending on their success in curbing unauthorized gambling activity, the courts could become permanent fixtures at Bangladeshi sports events.

Bangladesh doesn’t permit gambling on sports events and the BCB has been publicly embarrassed in recent years after allegations of match-fixing forced the cancellation of earlier T20 tournaments. The BCB’s Anti-Corruption Unit (ACU) will now patrol the stadium stands to identify individuals suspected of mobile wagering and deliver said suspects to the new special courts.

As a former part of India, Bangladesh gambling laws are based around India’s Public Gambling Act, 1867, which obviously makes no reference to online or mobile gambling. The law also calls for gamblers to pay fines of only BDT 100 (US $1.20), which is hardly much of a deterrent, even in a county where per capita income is around $1,500.

The intersection of Bangladeshi cricket with gambling has always been tetchy, and not just over the issue of sports betting. Last year, three members of the national team were criticized for visiting a casino following an international match in South Africa.