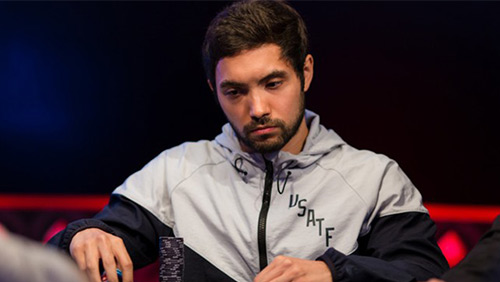 The Canadian High Roller, Timothy Adams, has won his second title of 2017 after taking down the €50,000 Super High Roller at the PokerStars Championship Prague, and PokerStars Casino crowns a seventh millionaire of the year.

I’m mind reading here, I know that, but come on, we all do this for a living, right?

It’s the back end of October, and Timothy Adams is in Macau competing in the HK$800,000 buy-in No-Limit Hold’em (NLHE) Super High Roller. The event began with 79 entrants, and there are only three people left.

Two of the best players on this little blue and green blob of ours, but Adams held the chip lead, and with $2.1m up top, there must have been a moment when Adams thought about divvying it up in whatever way Adams divvies up his winnings after competing in these things.

And then he came third.

Adams had to settle for $5k less than a million. Even the exchange rates were against him on that day.

Now, Adams is unlikely to end up in the flea market searching for Christmas bargains after banking that kind of lolly, but it must have stung.

So when he entered Day 3 of the €50,000 NLHE Super High Roller at the PokerStars Championship Prague with a 3:1 chip lead over Adrian Mateos, and an even more significant lead over Mikita Badziakouski, thoughts of winning the €555,000 first prize weren’t busting a gut to get into his conscious thought.

And with due cause.

As Adams explains, his opponents were pretty tasty.

“They are two of the best players in the world,” Adams told PokerNews sideline reporter Laura Cornelius. “They play close to perfect.”

You could even go one better than that Tim. According to the Global Poker Index (GPI) rankings, nobody is better than Adrian Mateos. But it wouldn’t be the Spaniard who would come closest to sticking a hatchet in the Canadian’s plans of winning his second major title of the year. Adams doubled up Badziakouski on two occasions, early doors, Mateos slipped down to the short stack, and Adams sent him to the rail, before doing the same to Badziakouski.

Adams adds this trophy to the one he earned for beating 45 entrants to win the €366,500 first prize in the €25,750 NLHE Eight Max at the PokerStars Championship in Monte Carlo.

The Canadian has now earned $3,686,373 in 2017 live tournament dollars, the best performance of his career now totalling $7.8m in live earnings, sixth in Canada’s All-Time ranking.

If Adams does have a personal goal to capture seven-figure scores perhaps he might want to dabble in the PokerStars Casino during his tournament breaks?

A PokerStars Casino player, from Germany (of course it had to be a German) called beckskr can afford more than an orange and a few nuts this Christmas when he won $1,879,437.02 after hitting the jackpot playing a slot machine called Arcade Bomb.

He becomes the seventh millionaire to emerge from the online casino at PokerStars in 2017. Shortly after beckskr hit the jackpot, a player from the UK, Syi2432 won $438,758.18 playing the slot machine Devine Fortune.