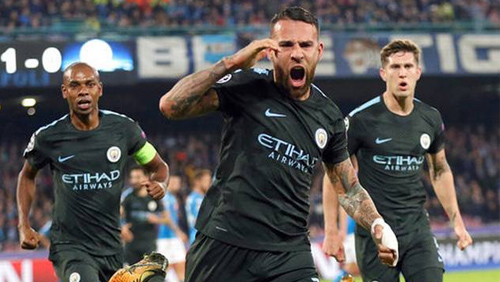 A round-up of Week 4 of the Champions League Group Stages and both Spurs and Man City book their seats in the knockout stages as Real Madrid lose a group game for the first time in five years.

On an evening when all the talk was whether Harry Kane could be a Galácticos, it was another potential Real Madrid target who stole the show as Spurs recorded a memorable win against the Champions at Wembley.

For the past two seasons, pundits have purveyed Dele Alli as a future Real Madrid player. However, all of that chitter chatter quietened after Harry Kane became a Ballon d’Or short-lister with his impressive displays for club and country.

Alli is back in the Real scouting handbook after a powerful display against the one-time favourites to retain their crown for an unprecedented third time.

The 21-year-old often chastised this season for scattering his toys over the field, romped around the midfield as if he owned the gaff. The breakthrough came just before the 30-minute mark. Harry Winks played a delightful ball to the rampaging Kieron Trippier down the right, the former Burnley defender sent the ball across goal, and there was Alli’s toe-poking the ball past the Real keeper.

Ten minutes after the break and Alli made it two with an individual effort that rebounded into the net courtesy of a Sergio Ramos deflection, and Christian Eriksen put the tie beyond the Spanish champions in the 65th minute after being put through on goal by Kane.

Ronaldo managed to pull one back for the visitors with ten minutes left to play, but Spurs held on comfortably. It was Real’s first defeat in the Champions League Group Stages in five years, and their third defeat of the season.

Fortunately for both Spurs and Real, Borussia Dortmund continued their abysmal Champions League campaign failing to beat lowly Apoel Nicosia for the second time. Spurs is guaranteed a place in the knockout stages, and Real will surely follow them barring a seismic meltdown.

Man City made it to the Champions League knockout stages on a night when Sergio Aguero became the club’s all-time goalscorer.

City beat Napoli, a team Pep Guardiola said was the best he had ever seen, after going behind to a beautiful goal from Lorenzo Insigne at the 20-minute mark, but the teams went into the break on an even keel after Nicolas Otamendi scored his first Champions League goal with a header at the far stick.

Three minutes after the restart and City were ahead. This time it was the other centre-half, John Stones, thundering the ball home with his head from a City corner.

Napoli equalised on 62-minutes; Jorginho scoring from the spot after Leroy Sane brought down Raul Albiol in the box, but the German star redeemed himself when his lung-bursting run set up Aguero to score his 178th goal in 264 games, beating Eric Brooks record that has stood since the 1930s. Raheem Sterling sealed the deal with a fourth in injury time.

Napoli may be a brilliant team, but they don’t have the points to back it up. With Shakhtar Donetsk winning again, the Ukrainian side now has a six-point lead over the Serie A side with only two matches remaining.

Liverpool hasn’t qualified for the knockout stages of the Champions League since 2008/09, but they have one boot in the next round after beating stubborn Maribor by 3-0 at Anfield.

Despite holding 83% of the possession in the first half, Liverpool failed to find the net; Roberto Firmino coming closest when the excellent Jasmin Handanovic tipped his attempt onto the crossbar.

Liverpool found their scoring touch in the second half. Mohamed Salah opened the scoring ten minutes after the interval with a neat flick at the front post. It was Salah’s tenth goal since joining from Roma in the summer.

Emre Can made it two after a beautiful one-two and finish with James Milner, and Milner failed to make it three when he missed from the spot, the fourth consecutive penalty miss from Liverpool in front of their adoring faithful. Daniel Sturridge scored a fourth in injury time.

The win means Liverpool remain at the head of the chasing pack on eight points, but it’s one of the tightest groups in the competition. Sevilla is a point behind after beating Spartak Moscow by 2-1. Both Spartak and Maribor can also qualify depending on the results in the last two matches.

Besiktas are that little bit closer to the knockout stages after a 1-1 draw at home to Monaco. Rony Lopes gave the visitors the lead in first-half injury time. Cenk Tosun equalised from the spot in the second half. Porto moves into second place after a 3-1 home win against RB Leipzig. Hector Herrera, Danilo Pereira, and Maxi Pereira scored for the Portuguese side; Timo Werner scored the only goal of the game for the Germans.