September 2017 – Bangkok, Thailand: The largest sports media property in Asian history, ONE Championship™ (ONE), recently held a kick-off press conference ahead of the highly-anticipated live event, ONE: WARRIORS OF THE WORLD, which takes place 9 December at the Impact Arena in Bangkok and is held in collaboration with Havoline. Headlining the event is ONE Superstar, top lightweight contender Shannon “OneShin” Wiratchai as well as the challenger, Rasul Yakhyaev of Russia. Also in attendance was Chairman and CEO of ONE Championship, Chatri Sityodtong, and ONE President of Thailand, Kamol ‘Sukie’ Sukosol Clapp, as well as ONE Championship athletes Rika Ishige, Dejdamrong Sor Amnuaysirichoke, Kritsada Kongsrichai and Sagetdao Petpayathai.

The main event bout has been announced as a lightweight title eliminator, with the winner going on to challenge the ONE Lightweight World Champion.

Ticket information for ONE: WARRIORS OF THE WORLD is available at www.onefc.com.

Official photos from the ONE: WARRIORS OF THE WORLD Press Conference at this link.

Chatri Sityodtong, Chairman and CEO of ONE Championship, stated: “Bangkok is one of the most amazing places in the world to hold a live sporting event because the fans are so passionate and energetic. The atmosphere we create at the Impact Arena is unique and you have to experience it firsthand to understand the kind of electricity that flows through the stadium. This main event we have lined up is sure to produce fireworks as Thailand’s biggest martial arts star, Shannon Wiratchai, showcases his skills inside the ONE Championship cage against Russia’s Rasul Yakhyaev.”

Kamol ‘Sukie’ Sukosol Clapp, ONE President of Thailand, stated: “It’s going to be another amazing evening of world-class martial arts action. There really is no place like home, and I am excited every time we have a ONE Championship event here in my city. ONE has been relentless in its pursuit to give fans  adrenaline-pumping action from start to finish, and ONE: WARRIORS OF THE WORLD will certainly aim to be the most exciting show in the history of Thailand.”

Lennard Kwek, Asia Pacific Marketing Manager, Chevron, stated: “We are thrilled to announce the renewal of this massive partnership with ONE Championship, the largest sports media property in Asian history. The values of ONE & the strength of the athletes, resonate deeply to the core of Havoline on genuine strength. Caltex Havoline believes that, just like the bouts in the ONE Championship cage, our vehicles often face difficult conditions on the road. But with a proven fighter against friction, wear and sludge deposits, you can be sure that you will have a smooth and worry-free ride.  We are excited at the possibilities and the opportunities for growth in both companies.”

Shannon Wiratchai, ONE Superstar, stated: “I would like to thank all the Thai people, and all fans of martial arts for the support. If you’re a fan of non-stop action and excitement, come and see us at the Impact Arena on 9 December. It’s going to be an amazing show. I am preparing very hard so that I can make Thailand proud. I know my opponent is incredibly well-rounded and highly-skilled, so I will surely not be taking him lightly. It’s going to be an absolute battle from beginning to end.”

Rasul Yakhyaev, stated: “After some time, I have returned to ONE Championship, seeking victory. I have improved so much as a martial artist in my time away. Now, I am confident in all of my skills. I am coming to Thailand to take on its toughest warrior. Thank you to ONE for the opportunity of a lifetime, I will definitely bring my best inside the cage.”

Rika Ishige, stated: “We can never really lose. Either we win, or we learn, and in that sense, there is victory in every defeat. Defeat is part of the game, it’s part of life. The most important thing is that we get back up and keep fighting for our dreams. I am honored to be part of this event, to represent Thailand as its first professional martial arts star. Come see us on 9 December, it’s a show you won’t want to miss.”

Dejdamrong Sor Amnuaysirichoke, former ONE Strawweight World Champion, stated: “I am ready to continue my quest in becoming the best martial artist I can be. I was once at the top, once the champion, and there is nothing I want more than to get back to that status. Whoever I have to face, whoever they put in front of me, better be ready for what I’m bringing into the cage. I am proud to represent Thailand on the biggest international stage of competition.”

Kritsada Kongsrichai, stated: “As a newcomer to this game, it’s definitely something that I have had to learn. The complete set of martial arts, from striking to grappling, is something that requires a great deal of discipline and determination to adapt to. I vow to showcase my improvements in this next bout and show what I plan for my future.”

Sagetdao Petpayathai, stated: “I am in this to prove my skills and my heart as a warrior. It doesn’t matter who I am matched up against. What matters is that I am prepared well and that I am in great physical condition. Everyday I put myself through the rigors of training to become the best martial artist I can be. I am excited for 9 December so that I can get back inside the cage and do what I love.”

Shannon “OneShin” Wiratchai of Thailand is a staple in exciting and memorable battles inside the ONE Championship cage. A mainstay of Bangkok Fight Lab, he trains in various martial arts disciplines at home in Bangkok, including Muay Thai, boxing, wrestling, and Brazilian jiu-jitsu. An offensive innovator, Wiratchai likes to be creative with his striking, employing a myriad of unpredictable off-angle elbows and kicks. Wiratchai seeks to continue his winning ways as he headlines ONE: WARRIORS OF THE WORLD in the main event bout against Rasul Yakhyaev.

26-year-old Rasul Yakhyaev of Grozny, Russia is a lightweight martial arts star who has racked up a solid following over his seven year professional career. He is adept in both striking and mat techniques, and is considered a solid contender with tremendous combat skills. A well-rounded warrior, four of Yakhyaev’s victories have come by submission while three have come by knockout. He made his ONE Championship debut in December of 2015, falling to Lowen Tynanes by submission. Yakhyaev now seeks redemption as he takes on Shannon Wiratchai.

Rika “Tinydoll” Ishige is a 28-year-old female atomweight from Bangkok, Thailand. She is of mixed Japanese and Thai heritage, beginning her martial arts training at age nine with aikido and taekwondo. Heavily influenced by her late father who trained in judo, Ishige went on to hone her skills as a martial artist, and turned pro earlier this year. All of Ishige’s victories have ended via impressive submission as she has been able to showcase her impressive grappling skills.

Former ONE Strawweight World Champion Dejdamrong Sor Amnuaysirichoke is a three-time Lumpinee Stadium Muay Thai world champion who has a 8-2 record as a professional martial artist. He is known as a technical striker with quick hands and lightning feet, employing some of the most unique and creative combinations. As a martial artist with over 25 years of competitive experience, Dejdamrong is a seasoned veteran. In his last bout, Dejdamrong defeated the Philippines’ Robin Catalan with his patented knee strikes. 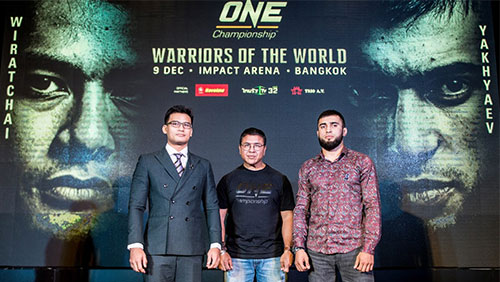 Kritsada “Dream Man” Kongsrichai is a Thai national wrestling champion, and has a 5-3 record as a professional martial artist. He has not gone the distance yet in his young career, having three knockouts and two submissions under his belt. He made his ONE Championship debut in the promotion’s first-ever Bangkok show in May 2016, where Kongsrichai delighted his hometown fans with a spectacular performance, stopping opponent Kev Hemmorlor via first-round technical knockout.

30-year-old Sagetdao Petpayathai is a Muay Thai specialist and a four-time Lumpinee Stadium champion who has won every major title in Muay Thai. He made his professional cage debut last March at home in Bangkok, defeating Malaysia’s Kelvin Ong via first-round technical knockout. Voted by Thai media as one of the greatest Muay Thai practitioners in history, Petpayathai is known for his highly technical knowledge in all of Muay Thai’s varied techniques. In his last bout, Petpayathai stopped Mahmoud Mohamed in the first round to improve his record to 2-0.

ONE Championship is the largest sports media property in Asian history. Headquartered in Singapore, ONE Championship is the home of martial arts. The world’s most exciting martial arts organization hosts the largest sports entertainment events across Asia, featuring some of the world’s best martial artists and world champions, all signed to exclusive contracts, on the largest media broadcast in Asia. In addition to its digital platforms, ONE Championship broadcasts to over 1 billion potential viewers across 128+ countries around the world with some of the largest global broadcasters, including Fox Sports, ABS-CBN, Astro, ClaroSports, Bandsports, Startimes, Premier Sports, Thairath TV, Skynet, Mediacorp, OSN, and more.

A household name well familiar by all Thai news reader, Thairath is the most powerful daily newspaper in Thailand. With more than a million copies of consistent      daily circulation since 1962, Thairath has been gaining a strong foothold as the leader in Thai society for more than 60 years and counting. Dedicated, experienced, and skilled in delivering human-centric news and relevant variety of content to daily lives of the Thais, Thairath reaches out to its massive reader base through both classic and cutting-edge channels including print, website, smartphone and tablet applications, SMS subscription, and social network. Today, adding to its array of platform, Thairath ventures into broadcasting business by officially joining the digital TV industry, creating and adding fresh perspectives to the Thai television industry through news and entertainment programs under the name “Thairath TV.” Since the launch in April 2014, Thairath TV has lifted up the industry standard with innovative news presentation technique including immersive graphic to help report compelling stories to the mass audience. Additionally, those cutting edge technologies are the main driving forces which puts Thairath TV on top in live sport broadcasting. With those establishments and the eagerness to continue to grow, Thairath aims towards eventually being a content provider in a global scale.

Chevron is one of the world’s leading integrated energy companies. Through its subsidiaries that conduct business worldwide, the company is involved in virtually every facet of the energy industry. Chevron explores for, produces and transports crude oil and natural gas; refines, markets and distributes transportation fuels and lubricants; manufactures and sells petrochemicals and additives; generates power; and develops and deploys technologies that enhance business value in every aspect of the company’s operations. Chevron is based in San Ramon, Calif. More information about Chevron is available at www.chevron.com.

Since 1904, as a part of the Chevron Corporation family of products, Havoline® has continued to produce innovations, based on science and technology. In 1946, Havoline® launched the “New and improved Havoline” with additives as a feature. Year after year, Havoline® delivers new innovations; the latest achievement is Deposit ShieldTM, which can protect engines from harmful sediments improving vehicle performance and fuel economy.