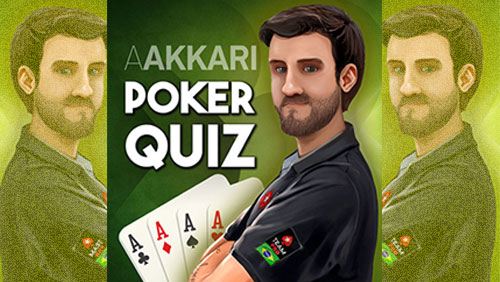 Three tales with a PokerStars theme including a new app from Andre Akkari, a successful first Sunday Million Live, and Korey Aldemir is the Barcelona boss.

Sometimes, nah, a lot of the time, I think to myself, “Why didn’t I think of that?”

A prime example is the naming of my daughter.

After a long, drawn out process, my wife and I settled on Zia, and everything was rosy until I learned there used to be a guy called King Nebuchadnezzar of Babylonia.

And then I see that idea turned into a tangible treat, and I feel a little depressed that I don’t have what it takes to join the higher echelon of the brainiacs.

PokerStars Team Pro, Andre Akkari, is the face of a new mobile app called Akkari Poker Quiz. The concept is simple and brilliant. If you walk into a poker room during a live tournament witness how many players are locked onto their mobile devices, like a bat using echolocation to lock on to the flap of a moth’s wings.

Instead of poker players using their mobile devices to argue on Twitter about politics, isms, and sticking their nose in other people’s business – activities that take your mind of the game – why not spend that time increasing your poker knowledge?

The questions focus on the rules of poker, the mathematical equations needed to make the +EV move, and poker trivia. There is also a Challenge mode and plans to create a Leaderboard.

The app was an instant hit in Brazil, storming to the top of the most downloadable game-related apps, and #2 in the General Apps category. The game is available in both Portuguese and English, with Spanish in the pipeline.

Game developer Pepper Heads are the brains behind the idea, Akkari provides the beauty, and the publisher Appsolute Games provided the brawn.

One idea I never had was to see how the iconic PokerStars Sunday Million would fair if you crossed it over to the live realm. Someone in PokerStars Towers did have the idea, and it works.

The event consisted of nine live starting flights and one online. The online leg attracted 1,585 entrants, and the single largest live turnout was 935 entrants on Day 1h.

Koray Aldemir is The Boss of Barcelona

Aldemir finished ITM four times, and made three final tables, earning €715,917 in prize money to finish at the top of a very illustrious pile of poker people.

The final place goes to the winner of the PokerStars Championship Prague leaderboard. The Prague event runs Dec 7-18 2017 live from the Casino Atrium Prague.

Here’s an idea you can have for free.

The job of a live poker dealer is as secure as Slaven Bilic’s job at West Ham. Be the one who creates the AI that takes over.

I don’t have the money.

I don’t have the time.

I don’t have the balls.