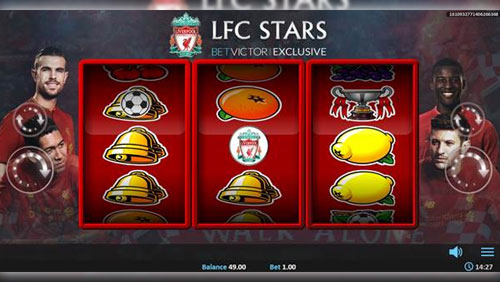 Exclusive to the operator, which is a principle partner of the Premier League club, the game offers players the chance to net 10 free spins, as well as hitting the jackpot prize of 250 x their starting stake.

The new title is the latest game created by Realistic Games for BetVictor, following last year’s release of the Liverpool FC Football Slot and The Million Pound Goal, launched as part of the operator’s Euro 2016 marketing campaign.

Paul Louis, COO at BetVictor, said: “Following the success of the Liverpool FC Football Slot and The Million Pound Goal, we’re delighted to once again partner with Realistic Games to offer our players this unique slot featuring one of the world’s most successful football clubs.

“Whether you’re a Liverpool fan or not, this highly-engaging game is sure to appeal to a wide audience all over the world. We’re already aware of the high-quality content Realistic Games produces, and it’s been a pleasure to work alongside them again.”

“Following a summer of little football action, everyone is eager for the new Premier League campaign to get underway and LFC Stars is the perfect game to kick-start the new season.”

Based in Reading, Berkshire Realistic Games is a leading supplier of high-quality, electronic gaming content to some of the world’s most successful operators. Our technologists, designers and modellers have many years of experience in both the land-based and digital gaming markets. We are passionate about the products we create. The team specialise in creating roulette, blackjack, slots, and fixed odds games tailored to a wide variety of devices, including PCs, iPhones, iPads, Android phones and tablets, and gaming machines. The games are fully-hosted on our ReGaL games platform, and are accessible to customers through a simple integration. ReGaL first went into production for Stan James in April 2011. Subsequent launches followed with BetVictor, Ladbrokes, bet365, Boylesports, Paddy Power, William Hill, Coral, Gala Bingo, Bede Gaming, Gaming Realms, Daub, Betfair, NYX, Rank, Optima, FSB, Leo Vegas, Vera and John, Betsson, GVC, and The Kindred Group.