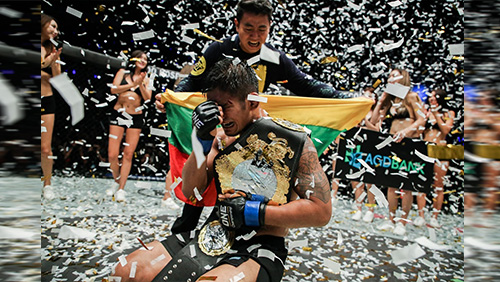 July 2017 – Singapore:The largest sports media property in Asian history, ONE Championship™ (ONE), hosted a blockbuster event in front of a packed Thuwunna Indoor Stadium in Yangon, Myanmar last Friday, 30 June, posting record-high social media growth statistics. ONE: LIGHT OF A NATION saw Myanmar crown its first ever world champion in any sport, electrifying a raucous crowd cheering on its new champion in front of a global audience.

Chatri Sityodtong, Chairman and CEO of ONE Championship stated: “The atmosphere in Yangon was absolutely incredible. It was an emotional moment for our new world champion, and an amazing achievement for the nation of Myanmar. Broadcast to millions of people all around the world, ONE: LIGHT OF A NATION was a magical evening of authentic martial arts action, true warrior spirit, and unbridled bravery.”

For the night of 30 June, ONE Championship posted record-breaking social media numbers, enjoying another sharp acceleration of its audience reach, scale, and engagement numbers. The organization gained more than 80,000 new fans on the evening — a four hour affair that featured nine spectacular martial arts bouts including the blockbuster main event. The overall social media statistics registered 5.4 million video views on the day, including over 3.2 million video views with 80 thousand shares for the main event recap.

In data sourced directly from Nielsen, Facebook and Repucom earlier this year, ONE Championship continues to experience exponential growth for 2017.

ONE has catapulted its video view numbers from 312 thousand video views in 2014 to a whopping annualized rate of 600 million video views for 2017 (based on actual results from the first half of 2017). Other key metrics across social media and TV broadcast registered similar exponential growth rates.

ONE Championship has posted three blockbuster events in a row as of current, with Manila’s ONE: KINGS OF DESTINY, Singapore’s ONE: DYNASTY OF HEROES, and now Yangon’s ONE: LIGHT OF A NATION, with each event garnering record-breaking numbers in the country of origin. As the promotion hits the next gear in the second half of the year, it is poised to continue this blistering pace beginning with shows lined up for Surabaya, Macao, and Kuala Lumpur.