3: Barrels of a PokerStars nature as the Stars Rewards scheme rolls out globally, Kevin Hart and Usain Bolt feature in the #Gameon social media campaign, and PokerStars Power Up heads into Alpha testing.


PokerStars is like an ancient glacier melting underneath the heat of change. Only they won’t vanish. There is something else beneath the ice, and by the end of this week, unless you live in New Jersey, you will all be able to see it.

Everything you ever knew about PokerStars loyalty program is dead. You can moan and groan like a grizzly bear awoken prematurely from hibernation, but there is no going back. What you see is what you get. 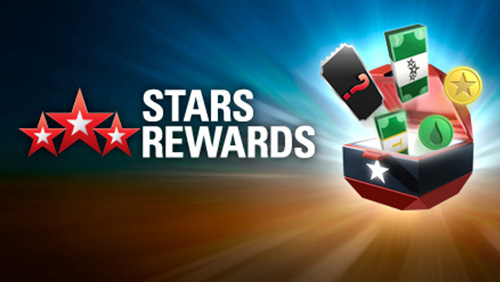 The Stars Rewards program launched in Denmark, back in May. The Italian market followed soon after, and today I received word that France, Spain, and Portugal are making the transition as I type, with the rest of the world to follow on July 6.

As a PokerStars customer based in good old blighty I received an email from the Stars Account team notifying me of the impending changes, and to await further instructions.

And so I wait, like a soldier on guard duty waiting for the email ping.

PokerStars has designed the new rewards program with a broader perspective in mind. The boffins behind the idea are corralling all three gambling disciplines into the rewards program (poker/sports/casino).

The new system is more personalised with Reward Points increasing at a rate dependant on how much you play. When you hit certain milestones, you gain access to special treasure chests that contain a variety of special prices.

If you’re a poker player, then you may win a seat in a PokerStars Festival or Championship event. Sports bettors may win big money free bets for the most prestigious sporting events in the world. And the casino peeps…well…I guess they win some cash to keep putting into their slot machines.

The motto of the new approach is to Make Every Game Count, and if PokerStars is to grow and prosper in the future, then I guess this is the best way for them to do that.

The personnel may have changed, but the strategy seems the same.

The most popular comedian on Twitter, Kevin Hart, and the world’s fastest man, Usain Bolt, will compete in a series of ‘challenges’ with the winners voted for via social media under the hashtag #Gameon.

The signal flare has gone up with the launch of a video designed by the creative agency Gravity Road, although I can’t for the life of me figure out what it is that the pair will be doing.

What I do know is the pair will both appear in the PokerStars Championship Bahamas to face each other heads-up as part of the Jan 2018 festivities.

PokerStars will be hoping that the #Gameon campaign will carry the same level of excitement of the #RaiseIt campaign, when Real Madrid star Cristiano Ronaldo, took on the NBA star Dwayne Wade in a series of football and basketball trick shots.

You can create a new rewards scheme.

You can hire the best celebrities and sports stars on the planet.

Ultimately, what you need is a quality product, and PokerStars have one under construction.

In my humble opinion, online poker doesn’t have a future in its current form. As technology advances and becomes more complicated so will the interests of the people who play games.

PokerStars is doing something about that with the move into Alpha testing for their new poker/esports hybrid PokerStars Power Up. I have to say, the early shots look amazing, and you should check your PokerStars lobby to see if the game is available for you.