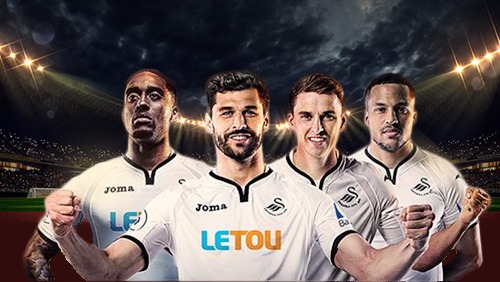 On Monday, the betting company announced that it will become the official 2017/18 shirt sponsor for English Premier League team Swansea City. Under the deal, LeTou’s logo will appear on the club’s home and away shirts.

This is LeTou’s first partnership deal with a Premier League football club, but what makes the deal different is that local charities will benefit from the sponsorship, according to LeTou. The company has identified two charities—Shelter Cymru and Disability Sports Wales—as part of its LeTou Goals for Good campaign, due to be launched later this year.

The promotional photos showed Paulinho wearing a T-shirt bearing the logo of LeTou with Tsukasa Aoi, one of the biggest adult movie stars in Asia, prompting the CFA to deliver a stern warning to the Brazilian midfielder, telling him to end his involvement with the gambling company while also urging players in the Chinese Super League to “cherish their own image.”

LeTou appears to have taken heed, and has since moved in a new direction.

“It would be easy as an Asian-facing gaming company to sign the cheque and build awareness purely through branding,” Fox said. “I was brought up in Glasgow and have family in Swansea. So when the opportunity arose to work with Swansea City, it was really important to me that LeTou uses our partnership to give back to the community as much as possible. I am confident that the ‘LeTou Goals for Good’ campaign we are launching will make a difference.”

“Swansea City has ambitions to grow our brand in Asia, where LeTou has a strong presence and a lot of experience,” Pearlman said. “But it was also their commitment to the local community in south west Wales which really captured our imagination. We were drawn to LeTou because of their drive to support local charities in Swansea, even though they are based thousands of miles away.”