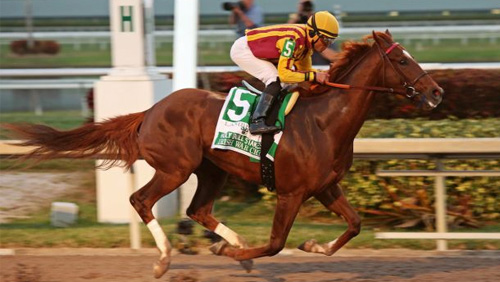 Saturday’s 149th running of the Belmont Stakes will certainly lack intrigue considering both horses who won the first two legs of the Triple Crown will not be competing. However, that has put Irish War Cry in a favorable position as +300 chalk in a 12-horse field, with only one entering all three Triple Crown races.

Epicharis is coming over from Japan to run his first Triple Crown race following an impressive run that has seen him win three of his last four races by a combined 25 lengths and finish second in the other one. He was eligible to run in the Kentucky Derby after winning the Hyacinth Stakes but decided to rest up for the Belmont instead.

Irish War Cry placed a disappointing 10th in the Kentucky Derby despite closing as one of the favorites. He sat out the Preakness, which was won by Cloud Computing, another notable horse not running in the Belmont along with Classic Empire and Derby winner Always Dreaming, who lost his Triple Crown bid by finishing eighth at Pimlico.

Last year, Creator won the Belmont Stakes from the No. 13 post position in a 13-horse field. Three of the past four winners have come from a position of 11 or higher, with Triple Crown winner American Pharoah the exception during that stretch in 2015 (No. 5). Patch will start from the No. 12 position this year while Epicharis is at No. 11. In addition, Irish War Cry will begin from the No. 7 spot with Lookin At Lee in No. 6.

Belmont Stakes to be first, not last, race of the Triple Crown
Erik Gibbs
20 May 2020