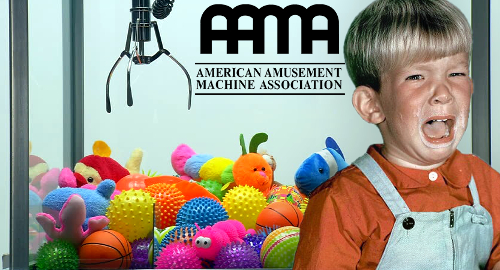 America’s arcade machine industry has adopted a new pledge to stop lying to small children regarding their ability to win a stuffed animal.

Last week, the American Amusement Machine Association (AAMA) announced the adoption of a Fair Play Pledge that all AAMA members are now required to sign and observe, with a further requirement to conduct an annual review of their adherence to said pledge.

The pledge seeks to ensure that all games offered for sale or use in the US by AAMA members “meet a standard of performance that allows a player a fair chance of winning with every game played.”

The pledge has three criteria, including ensuring that players have “sufficient time to identify, recognize and react” to the game play and (presumably) use a degree of skill to boost their chances of snagging a kewpie doll. Secondly, machines must ensure that players can improve with practice and experience, and, finally, the player’s input must control the outcome of the game.

If you’re wondering why any of this is necessary, it’s because California legislators threatened to impose punitive regulations on the amusement games industry back in 2013 after dealing with volumes of complaints regarding the inability of winning a prize on claw machines, teddy pickers and other carnie-type vending games.

Machines like Sega’s Key Master, in which player attempt to insert a key into a lock using a mechanical arm, have been the subject of lawsuits that accuse the machine of paying off at random intervals according to an operator-set formula, rather than when a player successfully inserts a key. (Sega is an AAMA member.)

California’s threats convinced the AAMA that “we needed a defensible position” to fend off “overreaching legislation and/or regulation.” The AAMA solicited input from its members, resulting in the pledge, the high standards of which the group told its members they “should all be very proud.”

That said, AAMA exec VP Pete Gustafson told Ars Technica that the AAMA was “not a police force” and that he didn’t see that that AAMA needed to “be more Big Brother than” convincing members to sign the pledge. Gustafson said it would use outside software engineers to investigate complaints but suggested that “99% of situations will be cleaned up with a phone call.”