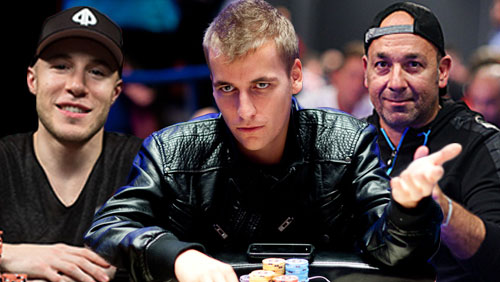 A brief round-up of the most impressive live tournament scores from both the partypoker LIVE Canada Grand Prix and the PokerStars Championship Monte Carlo including wins for Cassidy Battikha, Philipp Gruissem, and Imad Derwiche.

Let’s begin with news from Canada where the partypoker LIVE brand is currently kicking ass. The Playground Poker Club in Montreal is acting as host for both the Grand Prix and the Million, and the results for the first event are in the books.

The CAD $220 buy-in partypoker LIVE Grand Prix Canada afforded players the opportunity to get involved in the Day 1 action both online, live or both. The three-day event was a resounding success attracting 2,570 entrants, and with 38 players returning for the final day it was the experienced pro-Mike Leah who was in pole position.

Leah made the final table as one of two players who was still involved in the Golden Chip promotion offering a CAD $20,000 bonus to the player who lasted the longest. Leah’s private duel was with Kevin Zeidler, and for once Leah lost when he exited in fourth. Zeidler took third after a three-way deal left him with CAD $53,450 & the CAD $20,000 bonus.

Cassidy Battikha took the title and CAD $84,050 in prize money after beating Karim Abdelhamid in heads-up action. According to the Hendon Mob, it was Battikha’s first ever live tournament score.

The partypoker LIVE Million North America gets underway on the 4 May with a two-day CAD $10,300 High Roller. The five-day CAD $5,300 Main Event begins May 5.

Supporters of philanthropy will be delighted to hear that Philipp Gruissem won the €25,500 Single Day High Roller for €485,135. The Raising for Effective Giving (REG) co-founder donates a percentage of his gross winnings to effective charities, so we all benefit somehow from his win.

The German star defeated a field of 58 unique players and 27 re-entries to win his first live tournament since May 2015 when he won a €5,300 buy-in event at the European Poker Tour (EPT) Grand Final in the same venue for €147,700.

It’s not the first €25k High Roller Gruissem has taken down in Monte Carlo. Back in 2014, he topped a field of 159 individual entrants and 55 re-entries in the EPT Grand Final earning just shy of a million euros.

John Juanda finished fourth in that event back in 2014, and he went one better in this event finishing third. Gruissem defeated the former EPT giant Steve O’Dwyer in a flip to take the title after the pair cut a deal. O’Dwyer took the bigger prize.

There was also another final table appearance from the Canadian Daniel Dvoress who finished seventh. It is his third High Roller Final Table of the festival securing over €1.6m in prize money.

That’s the little boys games out of the way, now on to a real man’s game.

Derwiche beat the Finn Sampo Ryynanen in heads-up action to secure his second largest score of his career. He likes competing in Monte Carlo. In 2015, he finished second to Charlie Carrel in the €25,500 High Roller for €750,000, and last year finished eighth in the same event for a €147,710 score. It’s his second final table of this festival after finishing eighth in a €1,050 buy-in No-Limit Hold’em Win The Button event for €2,340.