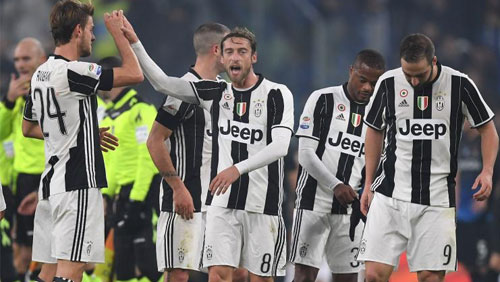 What should have been a night of superlative football turned out to be another tragic news story as the game between Borussia Dortmund and Monaco was postponed after a series of explosions struck the Dortmund bus as it left their hotel. In the other game, Juventus destroyed Barcelona in Turin.

Officials had to postpone the Champions League quarter-final tie between Borussia Dortmund and Monaco after three separate explosions rocked the team coach as it pulled out of a hotel en route to the Westfalenstadion in the build-up to the game.

Dortmund’s Spanish centre-half Marc Bartra was the only player injured in the attack. Barta sustained a fractured arm and shrapnel damage. The former Barcelona star will have to face the surgeon’s knife and will miss the rescheduled game that takes place Wednesday night.

ose responsible. Reports claim that experts found at least one other explosive device near the hotel.

Dortmund CEO, Hans-Joachim Watzke, said his team were suffering from severe shock and wasn’t sure how they would react when the rescheduled game kicks off on within 24-hours of the attack.


If Barcelona is going to win a sixth Champions League title, they are going about it the wrong way.

The team with the most feared forward three in world football had to come from four goals down to beat Paris St Germain 6-5 on aggregate in the Round of 16 in a match many are calling the greatest comeback in the history of this grand competition.

Well, if they are to make it to the semi-final they are going to have to dig deep and find another performance of pure genius after going down to a 3-0 defeat against Juventus in Turin.

A defeat wouldn’t have been a shock, after all, Juventus went into their tie against Barcelona unbeaten at home in their previous 47 games, but to head to the Nou Camp with a three-goal cushion in otherworldly.

Is that it for Barcelona?

The bookmakers don’t think so.

They make them a +1200 shot, and that’s better odds than Monaco or Leicester despite that three-goal deficit.