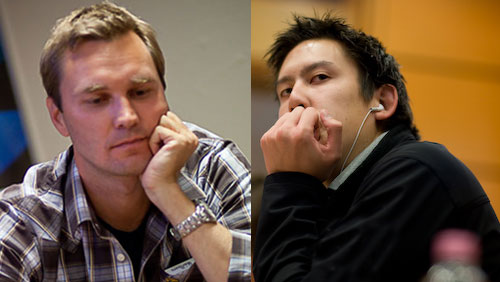 Partypoker has signed former PokerStars employees Johnny Lodden and Thomas Udness as the online poker room looks to make a splash in the Nordic market.

Partypoker is setting sail for the Nordic markets and they have hired a couple of pirates to show them the way.

Norwegian star, Johnny Lodden, is the latest professional poker player to join the partypoker payroll after signing a deal to be their figurehead in the Nordic market.

We are delighted to announce that @johnnylodden has joined Team @partypoker as an ambassador. https://t.co/3z5CVkb6ycpic.twitter.com/lzZeFTJthd

Isn’t he a PokerStars Sponsored Pro?

Well, I thought so.

Lodden signed for PokerStars in 2009, and spent eight years with the company before parting ways in February of this year, a divorce that I didn’t notice, and judging from a quick Google search, neither did most of the other peeps who get paid to type all day.

During his time with PokerStars, Lodden earned over $2.6m playing live tournaments, including holding the record for the most European Poker Tour (EPT) Main Event cashes with 22.

Talking about his decision to take his incredible talent on the partypoker LIVE circuit, Lodden, said that the appointment of EPT creator, John Duthie, as President of partypoker LIVE was a big reason.

Lodden will work alongside Thomas Udness who has been hired to grow the partypoker brand in the Nordic market. It’s because of the efforts of Udness that poker is now legal in Norway, and he was a big force behind the two Norwegian Championships of Poker that have been held in Norway since the regulators and government saw sense.

It’s not the first time that Udness and Lodden has worked together. PokerStars signed Udness to represent the brand in the Norwegian, Icelandic and Finnish markets in Sep 2008. He left to start a media production company called Adlers Gate AS in 2016.

Lodden to Debut in partypoker MILLIONS

The first time you will see Lodden wearing the partypoker patch will be at the forthcoming partypoker MILLIONS in Dusk till Dawn (DTD), Nottingham April 16 – 23. The tournament carries a £6m Guaranteed prize pool with £1m Guaranteed for the winner.

What a Christmas Party

When will it end?

The signing of Lodden takes partypoker’s ambassadorial roster to a 14 players.