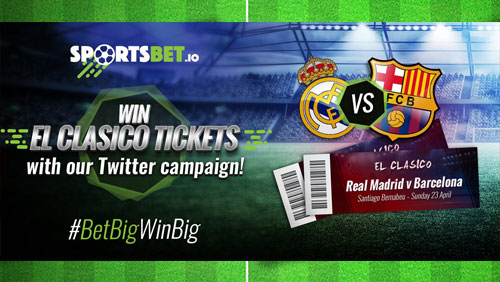 March 2017 – Tickets to Real Madrid v Barcelona in La Liga next month are the final prize being given away by Bitcoin sportsbook Sportsbet.io in its star-studded competition on Twitter.

The prize, which includes flights and a night in a hotel in Madrid, plus two tickets to the Bernabeu for El Clasico, rounds off a month of giveaways by Sportsbet.io from some of the biggest names in sport.

The competition, which has helped the account more than double in size, has given away memorabilia signed by sporting superstars like Lionel Messi, Roger Federer, Steph Curry and Odell Beckham Jr.

Director of Sportsbook at Sportsbet.io Chris Uren, said: “We’ve loved giving back to our followers over the last month, and this amazing prize is a great way to finish off our competition.

“Real Madrid and Barcelona have helped many of our users to some impressive wins at Sportsbet.io since we started last year, so we thought tickets to one of the biggest games in football was the best way to say thank you to our customers.

“With over 1,000 entries to the competition so far, we’re expecting plenty more before the deadline next Monday – head over to @sportsbet_io to join the fun!”

The Sportsbet.io Twitter feed, @sportsbet_io, features a mix of the latest odds and action from the world of sport.

Bitcoin sportsbook Sportsbet.io launched last year and boasts over 350,000 pre-match events per year, with a peak of 70,000 events during prime months.

It also features a comprehensive live offering with hundreds of ‘in-play’ markets available on major sports fixtures, as well as innovative new features such as Digital Sports Tech’s Player Props, which allows players to bet on an almost endless range of exciting markets.