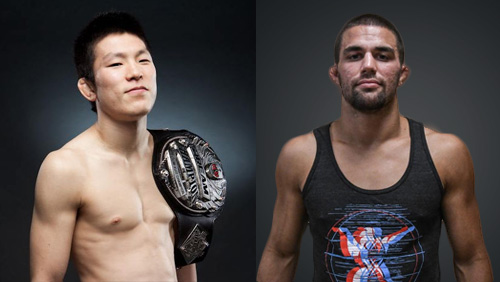 March 2017 – Singapore: The largest sports media property in Asian history, ONE Championship™ (ONE), has just announced a blockbuster Grappling Super-Match between former ONE Lightweight World Champion Shinya “Tobikan Judan” Aoki and IBJJF World and Pan American Brazilian jiu-jitsu champion Garry Tonon. The matchup will be held at ONE: DYNASTY OF HEROES set for 26 May at the Singapore Indoor Stadium. The spectacular fight card is headlined by an exciting main event bout between ONE Women’s Atomweight World Champion Angela “Unstoppable” Lee and top challenger Istela Nunes.

Ticket information for ONE: DYNASTY OF HEROES is available at www.onefc.com

Victor Cui, CEO of ONE Championship, stated: “Shinya Aoki is considered probably the greatest grappler in all of mixed martial arts. His ability to scientifically break down opponents on the mat is nothing short of legendary in the industry. At the same time, Garry Tonon is known as one of the most exciting Brazilian jiu-jitsu competitors in the world. The Aoki-Tonon Grappling Super-Match is certainly a matchup that fans will not want to miss. Catch them in Singapore this May!”

Lightweight veteran Shinya “Tobikan Judan” Aoki of Shizuoka, Japan, is one of the world’s most decorated mixed martial artists. He is the DREAM Lightweight Champion, former Shooto Welterweight Champion, and the former ONE Lightweight World Champion. The 33-year-old Aoki is a Brazilian jiu-jitsu black belt under Yuki Nakai and has won multiple grappling tournaments across the globe. He also holds a black belt in judo. A veteran in both MMA and the Brazilian jiu-jitsu scene, Aoki’s reputation as a grappling specialist is unrivaled.

Garry “The Lion Killer” Tonon of the United States is a Brazilian jiu-jitsu black belt under Tom deBlass and Ricardo Almeida. He is a No Gi specialist who has clinched multiple world titles at the IBJJF World and Pan American Championships. At age 14, Tonon fell in love with wrestling and grappling and has developed into a bonafide grappling superstar over the course of his career. He is a prominent fixture in submission-only format competitions such as Metamoris, Polaris and the Eddie Bravo Invitational.