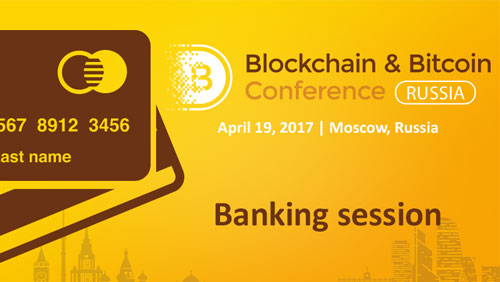 On April 19, Moscow will host a session dedicated to the application of blockchain technologies in the banking sector within annual Blockchain & Bitcoin Conference Russia. It will engage representatives of Sberbank, Alfa Bank and other companies, actively implementing blockchain in business processes.

Why Russian bankers are interested in blockchain
Early in the year, it has transpired that Sberbank has developed a prototype of currency exchange service using blockchain. It is noted that the system operates perfectly and now the matter depends on the regulation issue.

Another project also draws attention: the platform for registering product supply data according to factoring agreements. The project was tested by Sberbank along with M.Video company. The system allows to speed up goods dispatch and making payments: phone conversations and long corresponding are not required any more.

In late 2016, the first deal with a letter of credit based on blockchain, technically implemented by Alfa Bank, drew community’s attention. Opening and accomplishment of the letter of credit were formally established as a transaction based on Ethereum smart contract.

The Bank for Development and Foreign Economic Affairs (Vnesheconombank) is also on its way toward blockchain. In March 2017, VEB sent the project on blockchain implementation based on Rosreestr (Federal Agency for State Registration, Cadastre, and Cartography). Besides, the bank is considering the opportunity to apply blockchain in conducting cross-border transactions and mentioning high potential of the technology.

Issues covered by banking session
According to organizers, four speakers have already confirmed their participation in the session, however the list will be supplemented.

Ekaterina Frolovicheva, managing director of the technical innovations center at Sberbank, will tell in detail about implemented projects and present the market leader’s opinion regarding blockchain application in the Russian banking system.
Dina Merkulova, Trade Finance Director at Alfa Bank, will dedicate her presentation to the above-mentioned topic: blockchain implementation in letters of credit.

Elvira Shakirova, an expert at ICC Russia, Associate Professor of the Department of Economics of the State University “Dubna”, will tell about blockchain in the trade financing. And Vladimir Fedorov, the representative of Sovcombank, will present a case study dedicated to the registration of banking records in blockchain.

Besides, conference attendees will be able to join the Pro section dedicated to blockchain implementation in non-financial sector and the demo zone with cryptocurrency industry equipment.

You can register and find details on the Blockchain & Bitcoin Conference Russia website.