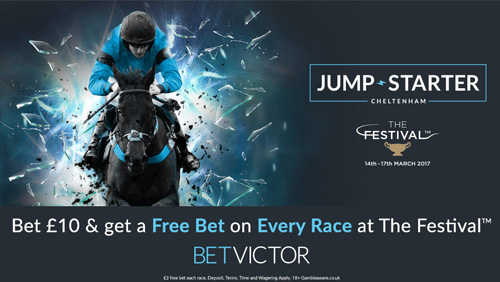 BetVictor has today announced its headline offer for the forthcoming Cheltenham Festival, which will see new customers who bet £10 receive a £2 free bet on every race for the duration of the four-day meeting.

Thus if you place a £10 bet ahead of the opening Supreme Novices’ Hurdle on Tuesday the customer will receive 28 (number of races at the Festival) separate £2 free bets. Not limited to horse racing markets, the initial £10 can be placed on any sport.

The offer, available to new customers only, is now live across all platforms and will be supported by a new TV ad campaign, airing for the first time across BT and Sky channels later today.

The headline offer is the latest in a series of industry-leading horse racing offerings from BetVictor, whose rich pedigree in the sport saw them launch the in-house developed Betfinder and Lengthen The Odds in 2016. The firm have been non-runner no bet on all Festival races since the 1st March.

“Cheltenham is the highlight of the racing year and we’re delighted to celebrate it with our exciting headline acquisition offer. We are determined to give customers joining us in the build up to and during Cheltenham true value, and believe the offer will make the Festival a simple and enjoyable experience for those betting with us for the first time. For our existing customers we have any number of enhancements and Bet Boosts planned and will be keen to take on the “public” horses throughout the Festival.”

About BetVictor
Established in 1946, Gibraltar-based BetVictor is one of Europe’s leading online gaming companies. The company has recently added to its strong sporting heritage by developing a reputation as a technological innovator within the betting and gaming industry.

In May 2014, Michael Tabor, who had previously been a major shareholder in the business, acquired sole-ownership of BetVictor.

In February 2016, the firm, who have a rich heritage in the sport, announced a three-year partnership with British Racing to become an Authorised Betting Partner (ABP).

BetVictor made one customer a millionaire on the final of Euro 2016 as part of its Million Pound Goal campaign, which ran in the build up to and throughout the tournament.
In July 2016 BetVictor announced a new three-year deal to become an Official Principal Partner of Liverpool Football Club. The agreement saw BetVictor become the Global Online Betting Partner and Training Kit Sponsor of the Club.