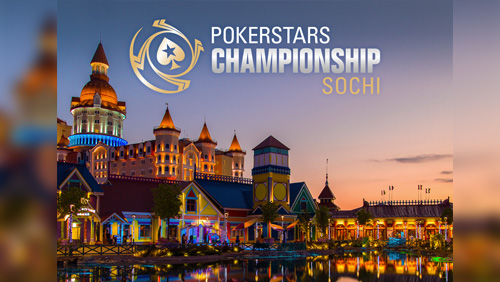 The PokerStars sponsored event will bring dozens of exciting poker tournaments to Russia’s premier holiday resort from May 20-31, including a guaranteed PokerStars Championship Main Event worth RUB 150,000,000 (approx. $2,600,000), the largest guaranteed prize pool ever featured in a Russian poker tournament.

The glamorous location, which played host to the 2014 Winter Olympics, is also famous for its beaches, lively nightlife, beautiful mountainous coastline and, of course, excellent skiing during the winter season, making it a favourite destination among Russian holidaymakers. The latest addition to the PokerStars Championship schedule will be one of the most exciting stops of the PokerStars Championship’s maiden season.

Russian super high roller and newly appointed Team PokerStars Pro Igor Kurganov said: “I’m excited to see PokerStars first ever sponsored live event in Russia and will be competing in the events, of course. I am interested to see the area after the massive investments it has received for the 2014 Winter Olympics. Sochi itself is a summer/ beach destination but I hope to make it out to the gorgeous and very close mountain region of Krasnaya Polyana, too!”

Team PokerStars Pros also expected to attend include Liv Boeree, Bertrand “ElkY” Grospellier and Chris Moneymaker – who all have their eyes fixed on the glory of becoming Sochi’s champion.

Highlights of the 11-day extravaganza include:

Please note: All event buy-ins listed above are subject to change due to fluctutations in currency exchange and are designed in Russian rubles at a rate of 60/1. All rake and staff deductions are the same percentage as standard PokerStars sponsored events.

“Sochi is a premier location for hosting world class events and we are looking forward to bringing PokerStars Championship Sochi to this exciting location,” said  PokerStars Director of Live Events Edgar Stuchly.

“With its vast array of 5-star hotels, outdoor activities, and 300 sunny days a year, alongside a brand new casino, Sochi is fast becoming a prime vacation spot and gaming destination, all in one.”

The event, organised by Sochi Casino & Resort, promises to be a fantastic opportunity to play big money live poker with all the excitement that a PokerStars Championship brings, including full TV and webcast coverage, a host of celebrities and Team PokerStars Pros in attendance, and much more to entertain players and visitors. In addition to a packed schedule of events with 70+ tables in total,  there will be cash games running 24 hours a day.

There will also be an exclusive Sochi Hotel discount promotion running where players who respond can enjoy a 50% discount on standard accomodations at the Mariott Hotel during the PokerStars Championship Sochi Main Event.

About Sochi Casino and Resort

The facilities of Sochi Casino & Resort include 569 state-of-the-art slot terminals, 70 gaming tables for Black Jack, Russian Poker, Casino Texas Hold’em, Baccarat and a separate Poker Room. The Casino also features 7 individually designed VIP Halls, as well as Onyx and Dragon halls. Sochi Casino & Resort stands out not only as an elite gaming and entertainment project, but as a big venue that can conveniently accommodate up to 2,000 people at a time.

The main mission of Sochi Casino & Resort is upscale customer service. We value every guest and the wishes of our guests are our highest priority, we are ready to address every request related to entertainment within our venue.