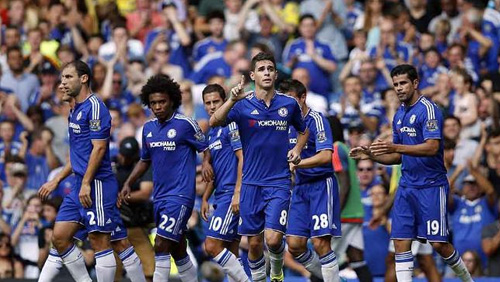 Week 22 of the English Premier League sees Chelsea and Arsenal move ahead of the pack after four of the top six sides all drop points as the title race flies into the second half of the season.

If Chelsea does go on to regain the Premier League title they loaned to Leicester City last season, then this weekend will prove to be one of the crucial plot twists.

Four of Chelsea’s main title rivals dropped points 24-hours before the Blues lined up against relegation fodder, Hull. It was a perfect opportunity for Antonio Conte’s side to put some daylight between them and the chasing pack. Chelsea had won all eight of their previous home games. Hull had lost all eight of their last away games. After 90-minutes both of those runs had extended to nine games.

The Chelsea boss only made one change to the side that beat Leicester 3-0 at the King Power – Willian making way for Diego Costa to return after two matches in the sin bin for suggesting money is more important than playing for the London club.

I suggested Chelsea should have gotten rid of him. The Chelsea fans disagree, voting with their sore throats. And it was Costa who opened up the scoring seven minutes into first half injury time converting a Victor Moses cross with his usual aplomb to return to the joint top of the league’s goal scoring charts with 15.

The extended amount of injury time came about after a sickening clash of heads between Hull’s Ryan Mason and Chelsea’s Gary Cahill. Mason was later rushed to the hospital and underwent surgery to repair a fractured skull.

Chelsea wrapped up the points ten minutes from time after Gary Cahill found space at the far post to head home a Cesc Fabregas free-kick. 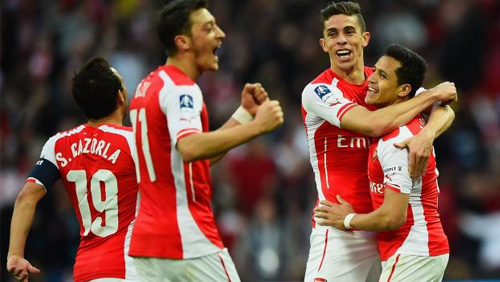 Arsenal moves into second spot, eight points behind Chelsea, after a hard fought win over in-form Burnley. Sean Dyche’s side arrived at The Emirates having won four of their last five games, and Arsenal had to dig deep after playing the final 30-minutes with only 10-men after the man in the middle brandished the red card to Granit Xhaka for a two-footed tackle on Steven Defour. The Arsenal midfielder is turning into a liability for Arsene Wenger. It was his third red card of the season, and sixth in his last 76 games.

The Burnley defence wasn’t breached until the 59th minute when Shkodran Mustafi scored with a header from a Mesut Ozil corner. It looked like that single goal would be enough until a rash foul on Ashley Barnes by Francis Coquelin in the 93rd minute allowed Arsenal fan Andre Gray to step up and equalise from the spot. Arsene Wenger was so incensed by the award of the penalty that he also managed to get sent off.

Down to 10-men, with their manager sent for an early bath, and time running out, Arsenal ploughed forward in search of a winner – and they found one. Ben Mee was adjudged to have kicked Laurent Koscielny in the face in the penalty area in the 98th minute. The man who used to wear black pointed to the spot, and despite missing his last two penalties, Alexis Sanchez scored the most brilliant penalty to give Arsenal the win.

Man City shared a point apiece with a Spurs side searching for their seventh successive win. The main thrust of the action occurred around a 10-minute spell just after half time. A long ball from the back saw Leroy Sane through on goal. Hugo Lloris looked the favourite to reach the ball first, but the Frenchman decided to try a diving header; totally missed the ball, and Sane stroked it into the back of the net.

City was two to the good five minutes later, and once again Lloris was at fault. Raheem Sterling broke down the left and sent in an appalling cross, but Lloris spilt it into the path of Kevin de Bruyne, and the Belgian said thank you very much.

Fortunately, for a Spurs side who played terrible on the day, they replied within five minutes. Kyle Walker found some space down the right-hand side and crossed for Dele Alli to head home his eighth goal in the past six games.

Then controversy as Kyle Walker got away with white murder when he clearly pushed Sterling in the back when through on goal. Sterling tried to stay on his feet, and the referee gave kids up, and down the country, an excuse to dive when he failed to award a spot-kick. Spurs immediately broke, and Son Heung-min picked up a flick from Harry Kane to pull Spurs level.

Liverpool became only the fifth side not to beat Swansea thus ending an unbeaten home record that stretched back a year. It was the surprise result of the weekend as Paul Clement’s side took a two-goal lead thanks to a brace from Fernando Llorente, lost it thanks to a comeback double from the Brazilian Firmino, only for Gylfi Sigurdsson to steal all three points with his sixth goal of the season.

Jurgen Klopp’s side has now lost to Swansea, Bournemouth, and Burnley and that’s not what title winning teams do.

Any lingering hopes of Man Utd winning the league died on its arse at Stoke. United are still unbeaten in 17 games in all competitions but have now dropped four points in their last two games with draws against Liverpool and Mark Hughes’s men. There is no margin of error with Chelsea running along like a Stallion with a hard on.

United battered Stoke. They had 70% possession and 25 attempts on goal but were 1-0 down with four minutes of stoppage time played after a Juan Mata own goal had given Stoke the lead early doors. Step up to the plate Wayne Rooney. The England and Man Utd skipper came off the bench to curl home an excellent free-kick from the left to beat Sir Bobby Charlton’s long-standing record as the all-time top goalscorer at Man United with 250 goals.

Big Sam hasn’t been able to spark Crystal Palace into life since his arrival at the club, and they dropped into the bottom three after losing by a goal to nil at home to Everton. Seamus Coleman scored the winner in the 87th minute. It was his third Premier League goal of the season, more than any other defender in the league. Everton is now only five points behind Man Utd in seventh place after winning four of their last six games.

Sunderland is the bottom side after another hammering, this time at the hands of West Brom. It wasn’t an unexpected victory. Sunderland had only beaten the Baggies once in their past 14 clashes. Two superb strikes from Darren Fletcher and Chris Brunt hammering another nail in the coffin that the Sunderland board will push David Moyes into before the end of the season.

Middlesbrough inched closer to the relegation zone after a home defeat to West Ham. The Hammers continue to do well without Dimitri Payet – who will almost certainly sign for Marseille in the coming weeks – winning their second game on the spin without him. Once again it was Andy Carroll who was grabbing the headlines scoring twice. Jonathan Calleri scored the third in injury time. Cristhian Stuani scored for Boro.

Finally, the Champions Leicester are also going to be fighting for Premier League survival this season. The Foxes are still winless on the road after a three-goal mauling away at Southampton. Goals from James Ward-Prowse, Jay Rodriguez, and Dusan Tadic ended a run of four straight Premier League defeats for Southampton. This time last year, Leicester was second on goal difference behind Arsenal. Today, they are five points away from the unthinkable.