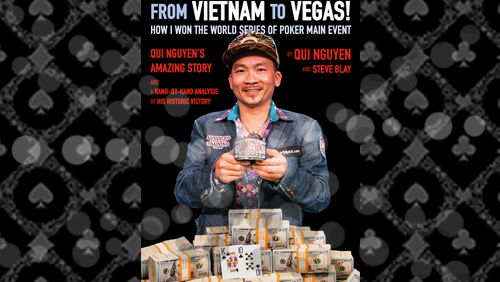 D&B Publishing will publish an autobiography of the World Series of Poker Main Event Champion, Qui Nguyen, in time for the 2017 November Nine.

Daniel Negreanu called him ‘the closest thing we have had to Chris Moneymaker,’ and D&B Publishing has got the scoop.

The WSOP Main Event needed Nguyen after the disaster of the year before. His high-octane style a stark contrast to the slow and laborious bore fest that put most of us to sleep as Joe McKeehen took a stroll in the park.

I think the format of the book is perfect. Earlier this year I polled over 50 poker players to describe the most influential books of their careers and Gus Hansen’s Every Hand Revealed ranked highly as well as the limited supply of biographical pieces of work in print. My only gripe is we don’t get to see any of the earlier hands like we did with Hansen’s epic.

D&B Publishing will publish the book in November 2017 on the eve of the WSOP Main Event Final Table.

It’s going to be a great year for D&B Publishing. Not only have they picked up the Champion of the World but they have a few more titles that are sure to sell like Ramen in Burning Man.

Phil Hellmuth knows what it’s like to win WSOP Main Event bracelets in different continents and D&B Publishing will launch his biopic Poker Brat the Phil Hellmuth Story sometime in 2017. His long-awaited tell-all was due for release in 2011, but his publisher Harper Collins pulled out after the events of Black Friday.

And Chris Moorman will also be releasing a book under the D&B banner. It will be Moorman’s second book, and this one will be more biographical with a selection of top pros including Daniel Negreanu taking a look at Moorman’s play. Negreanu has also written the forward for the Hellmuth’s autobiography.

And you can’t go a year without Jonathan Little writing a poker book. Mastering Small Stakes No Limit Hold’em will also hit bookshelves in 2017 along with Advanced Concepts in No Limit Hold’em by Hunter Cichy.