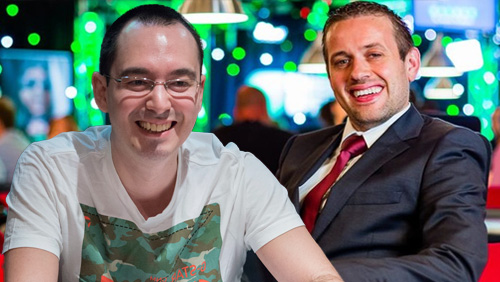 So William Kassouf is a big thing.

He has been the talk of the World Series of Poker (WSOP) highlights show ever since the action started to get serious, and this week he even managed to get radio show host Stugotz to say, “If poker were like that all the time, I would watch poker all the time. That’s a better product than the NFL.”

The ‘product’ that Stugotz was referring to is the episode that showed Kassouff exiting in 17th place after a cooler against Griffin Benger that has gone viral. It was kings versus aces with the Canadian holding the aces, but it was the verbal sparring that has gotten the mainstream media asking Santa for a poker chip set.

Poker needs players like Kassouf for this very reason, as long as the needling doesn’t cross the line. But where is the line drawn? Where does ‘speech play’ go from a skill and an art form to a moral and ethical issue. It’s a tough one, and that’s been the topic of debate around the poker world for most of the week.

If William Kassouf has a fan club in the Czech Republic, they will be glad to know that the WSOP is coming to town, in a big way, 2017 & 2019. The King’s Casino in Rozvadov has inked a multi-year deal that will see them host the World Series of Poker Europe (WSOPE) and I think it’s going to be a significant partnership for poker in Europe.

That deal between the pair will also see King’s Casino host multiple World Series of Poker Circuit (WSOPC) events leading up to 2020, and this week the Circuit was in the Horseshoe Hammond where Dylan Linde and Ravi Raghavan came up trumps.

Linde booked the largest score of his career by defeating 1,308 entrants in the $1,675 buy-in Main Event winning $348,269, and Raghavan picked up the Casino Championship title and the High Roller title earning $132,798 in the process. Both players also win seats into the Global Casino Championships.

Talking about Main Events and two November Niners picked up sponsorship deals this week. Bookies second favourite, Qui Nguyen, entered into a partnership with StakeKings and put up 1% of his winnings on the site. And Kenny Hallaert will not be wearing a Unibet patch on the big day; he will be wearing an 888Poker patch. The new Unibet Tournament Director signed a special one-off deal for the WSOP Main Event.

Two poker players who are no longer with us were in the news this week. PokerStars will honour Chad Brown by sponsoring the third iteration of the Chad Brown Memorial Tournament as part of the PokerStars Festival in New Jersey. And the World Poker Tour (WPT) and Dusk till Dawn (DTD) announced that the winner of the Devilfish Cup (created in honour of Dave Ulliot) would pick up a one-of-a-kind guitar signed by the Queen guitarist Brian May.

In other news, the Cash Game Festival Series moved online. The event has been a big success in the live arena, and this week it appears on the iPoker Network for the very first time. The Grosvenor United Kingdom Poker Tour (GUKPT) launched their 2017 tour dates, and the Microgaming Poker Network (MPN) launched a new online MTT schedule and a new Mac Client.

Partypoker were also in the news this week when they signed Joao Simao to be the face of partypoker in Brazil. Stefan Jedlicka won the Italian Poker Tour (IPT) High Roller title in Malta for €88,039; Ismael Bojang won the IPT Main Event for €101,940; David Yan won the European Poker Tour (EPT) €25k High Roller in Malta for €465,800, and Jakub Michalak won the €10k Single Day Event for €178,133. 468 players entered the EPT Malta Main Event. The winner will walk away with €355,700.