The Champions League returns and Barcelona and Bayern Munich hit the ground running, scoring 12 goals between them in opening night victories against Celtic and Rostov. 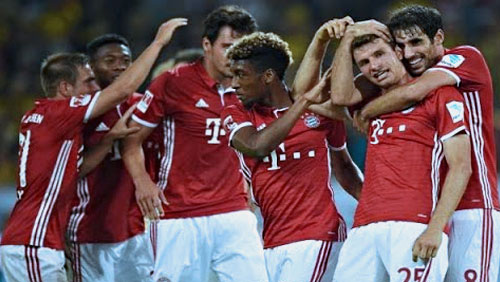 The last time Celtic appeared in the Champions League group stages they suffered their worse European defeat in history going down 6-1 to Barcelona at The Nou Camp, so it wasn’t the best place to start their 2016/17 campaign.

Neymar was the star of that cold and crisp night in December, scoring a hat trick, and he had another excellent night alongside his strike partners Lionel Messi and Luis Suarez, scoring one and setting up a couple more. But it was the World Player of the Year who stole the show with a hat-trick. Suarez grabbed two late goals, and Andres Iniesta thundered home a magnificent volley.

Celtic was brought down to earth with more than a bump after starting the Scottish Premier League season in fine form, winning all four games, including a 5-1 victory over their rivals Rangers on the weekend.

Barcelona, on the other hand, were coming off the back of a surprise 2-1 loss at home to lowly Alaves. After watching this exhibition match, you wonder how on earth that could happen?

Barcelona is the favourite to win the Champions League this season, and with good reason. Celtic don’t stand a chance in one of the toughest groups in the competition.

The other Group C match between Man City and Monchengladbach was called off because of torrential rain. The game has been rescheduled to take place with the second batch of games on Tuesday night.

Group D promises to be another cracker after last year’s semi-finalists Bayern Munich and Atletico Madrid were coupled together once again.

The German champions started their campaign in similar fashion to Barcelona after a 5-0 drubbing of Rostov. It was a brutal debut for the Russian minnows, but you get the feeling it won’t get as bad as this in their future matches.

The Bayern goals came from Robert Lewandowski, Thomas Muller, Juan Bernat, and a brace from Joshua Kimmich. Bayern coach, Carlo Ancelotti, has won this competition three times – more than anyone in history.

Last year’s runners-up Atletico Madrid started their latest campaign against PSV Eindhoven and came away after a professional performance that’s becoming par for the course in the Champions League.

The tie could have gone either way before a Saul Niguez volley just before half-time sealed the three points for Diego Simeone’s men. PSV had a goal ruled out for offside, and a penalty saved by the Madrid keeper.

Arsenal and PSG Start With Stalemate in Group A

Paris St Germain began their Champions League campaign in a post-Zlatan Ibrahimovic era with a 1-1 draw at home to Arsenal.

Edison Cavani was the hero and villain after scoring with a neat header in the first minute before going on to miss a glut of chances. The Arsenal goalkeeper, David Ospina, had a world class performance at the back, and Arsenal made PSG pay for all those Cavani misses when Alexis Sanchez equalised in the 67th minute with a smart finish. Olivier Giroud and Marco Verratti were both sent off for playing the game of handbags at ten paces.

Here is the full round up of results.

Fixtures to be Played