Five podcasts that have absolutely nothing to do with poker but deserve the attention of the professional poker player.

I once learned about the world listening to pearls of wisdom spew forth from the idiot box. I had an awakening of sorts. The idiot box emigrated to the tip and my books took over. I thought that would be it, I mean, I can’t read all the books in the world, and there is so much to read, but lately another form of education has shown me some impressive intellectual cleavage. 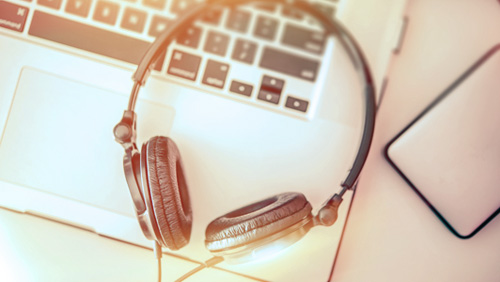 Smart people realise that time is the most precious commodity known to man unless you are that Matt Damon character stuck on Mars and then it’s potatoes. Creative use of your day is vital, and podcasts fill the white space better than any other form of ‘stuff’.

You can listen to them when you are walking down the street, commuting to work, or waiting for the optician to ask you if you can ‘see better through one or two.’

Choose wisely and you can learn so much.

Don’t, and you will never get that time back.

James Guill at PokerUpdate recently wrote an article titled ‘5 Best Poker Podcasts You Need to Listen to Right Now,’ and it inspired me to let you know what five podcasts I think professional poker players should listen to from an entrepreneurial standpoint. After all, that’s what they need to become if they are to survive.

I like the direction Malcolm Gladwell has taken with his Revisionist History podcast. Instead of streaming content on a standard frequency he has gone all Netflix on us and created a Season 1.

It consists of 10 episodes covering a broad range of events from the past with a sprinkle of Gladwell pondering. I would give his first season a 3 out of 5, but I recommend it because I think it’s going to get better.

The first season is a testbed; you can feel the experimental vibe. But there is so much that professional poker players can take from this season, and I round up my main thoughts in my blog post What Malcolm Gladwell’s Revisionist History Taught me About Poker.

2. The School of Greatness by Lewis Howes

“Otherwise, you are playing another person’s game,” says Howes.

The focus of the podcast is Howes’ constant search for the meaning of greatness. He does this through self-introspection and by interviewing some of the most interesting people on the planet.

There are a lot of podcasts built on the ‘interview someone and try to extract their genius’ model. What I like about Lewis Howes is the breadth, depth, and variety of his guests.

Howes was a professional footballer before an injury-shredded his dreams and set fire to the pieces. His sporting observations and experiences also suit the professional poker player audience.

I have just tossed a coin between this podcast and the Tim Ferris Show by Tim Ferris. Both podcasts convey the same theme – they interview top class performers, searching for what makes them top class – but I eventually plumped for Altucher for the following reasons.

James Altucher is great at asking the awkward questions, and he does this because he is a great listener. As a podcast host, I know how easy it is to get lost, thinking about your next question, but Altucher is always on point.

He continually apologises for interrupting his guests, but I like his interruptions. They ensure the line of enquiry remains compelling, and that’s important. I also like the way that Altucher interjects his personal experiences to provide more context.

Altucher is also a huge poker fan and talks about poker a lot on the show. He is also a chess grand something or other and has a great love for game theory, and has won and lost millions of dollars throughout his life as an entrepreneur/investor.

The Bruce Lee podcast is essentially his daughter, Shannon Lee, dissecting the great man’s philosophical musings with the added twist of a blood-relation flavour.

Before I listened to this podcast, I thought Bruce Lee was a cool as fuck karate bloke who made funny noises and facial expressions when crushing chests. I had no idea he was a philosopher, and his insistence on having his philosophical input into his breakout movie Enter The Dragon saw him refuse to go on set for a fortnight. I watched it after first listening to the podcast, and it’s still a classic after all these years.

Every poker player should engage in a little philosophy and why not start with the man who can play ping-pong with nunchucks?

Flynn started from nothing and built a podcast empire all through passive income. As poker grows tougher by the minute, professionals need more income tributaries than ever before.

And if you open your eyes, you can see that it’s already begun with more pro poker players writing books, coaching, and strengthening their personal brand by streaming online at Twitch.

Flynn shares everything that worked for him while at the same time interviewing people who have done the same. What I like about Flynn’s choice of guests is they are a mixture of top brass and salt of the earth. One minute he is interviewing Tim Ferriss asking him how he made gazillions writing books and in the next sniffle talking to some guy called Frank Castle about how he makes $50,000 a year selling advice on how to mow the lawn.

Those are my podcast picks that have nothing to do with poker, but every poker player should sling an ear at, what are yours?