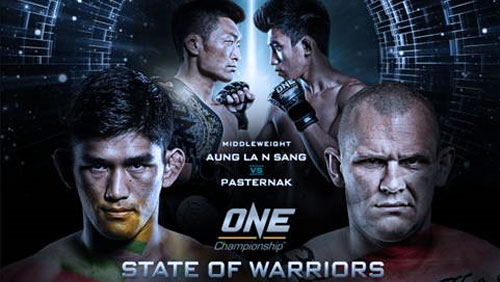 06 September 2016 – Yangon, Myanmar: The largest sports media property in Asian history, ONE Championship™ (ONE), returns to Myanmar for another exciting evening of world-class mixed martial arts action. ONE: STATE OF WARRIORS is set for Friday, 7 October at the state-of-the-art Thuwunna Indoor Stadium in Yangon. Headlining the event will be “The Burmese Python” Aung La N Sang as he takes on top Polish middleweight Michal Pasternak. In the global main event, ONE Strawweight World Champion Yoshitaka “Nobita” Naito of Chiba, Japan will defend his title against Joshua Pacio of Baguio City, Philippines.

Tickets for ONE: STATE OF WARRIORS are available click here.

CEO of ONE Championship, Victor Cui stated: “The way Aung La N Sang can carry a crowd is unparalleled. The fans effortlessly move to the beat of his drum and it’s an atmosphere ONE Championship just can’t get enough of. Aung La N Sang is ready to take on the biggest challengers the promotion has to offer, and he’ll get to work this October starting with Michal Pasternak.”

Managing Director of AGD, Htoo Htet Tay Za stated: “To be a part of ONE Championship and Aung La N Sang’s triumphant return to Myanmar was an immensely proud moment for us at AGD Bank, and we want to keep that momentum going. We cannot wait to see the Myanmar people come together once again to cheer for our heroes in the cage as they compete for national pride on the largest stage in Asian MMA.”

Deputy Managing Director of the First National Insurance (FNI), Mr. Aung Ko Ko Tin Win stated: “We are excited to be joining AGD Bank as a co-presenting partner for this pinnacle event in Myanmar. ONE Championship’s live events bring a unique atmosphere to the city and it’s something we are proud to help deliver to the fans.”

31-year old middleweight standout Aung La N Sang is arguably one of the world’s most renowned Burmese fighters whose constricting style of fighting has earned him the moniker of the “The Burmese Python”. Born in Myitkyina in the mountainous Kachin State, Aung belonged to an ethnic minority known as the Kachin. A veteran of 27 professional bouts with a record of 18-9-0, 1NC, Aung is on a three-fight win streak in ONE Championship, with all three victories coming by highlight-reel finish. He fights Michal Pasternak in front of his hometown crowd next.

Aung La N Sang stated: “The people of Myanmar are awesome MMA fans. Although MMA is a fairly new sport in Myanmar, it brings me fulfillment to see fans enjoy the sport back home. I am truly honored to represent the nation and I will do my best to beat my opponent Michal Pasternak and make my people proud.”

Middleweight contender Michal Pasternak of Pinczow, Poland is a tall, lanky fighter with a 11-1 professional mixed martial arts record. A well-rounded mixed martial artist, more than half of Pasternak’s victories have come either by knockout or by submission. In his last bout, Pasternak competed for the inaugural ONE Light Heavyweight World Championship across the cage from Brazilian jiu jitsu legend Roger Gracie. Now he takes on Myanmar’s favorite son, Aung La N Sang.

Michal Pasternak stated: “My last bout taught me a lot. I am young and talented, and I will show the world why I deserve to be called one of the top middleweight contenders in ONE Championship. I know Aung is the hometown hero, but I’m not here to stand in awe of others. I’m here to spoil the party and take over the division.”

Yoshitaka “Nobita” Naito of Chiba, Japan is an unbeaten mixed martial artist with a perfect 11-0 record. He owns five victories by submission and one by knockout. The 32-year old, who made a name for himself at Japan’s world famous Korakuen Hall competing for Shooto, captured the ONE Strawweight World Championship in his last bout, submitting former champion Dejdamrong Sor Amnuaysirichoke. Naito makes the first defense of his strawweight belt against Joshua Pacio.

Unbeaten strawweight Joshua Pacio of Baguio City, Philippines owns a stellar 8-0 professional mixed martial arts record and is one of the country’s most highly-regarded mixed martial arts prospects. A member of the famed Team Lakay MMA gym, Pacio is a wushu specialist with a solid grappling skill set. All eight of his victories have come by finish, including three wins by knockout and five wins by impressive submission. Pacio takes on the toughest test of his young career next against the champion, Yoshitaka Naito.

AGD Bank aims to build the future for a progressive Myanmar. Myanmar is embarking on several decades of fundamental change. The future will look very different, and it will be full of opportunities that will touch every aspect of the lives of the people of Myanmar. At AGD Bank, our vision is to provide the vitally important banking infrastructure that will make a lasting and sustainable impact on this future, building the economic foundations for a progressive Myanmar. In order to achieve our vision, we will deliver banking excellence through inspired and outstanding customer service. We will strive in everything we do to set our own unique, industry-leading, standard for banking excellence. We will accomplish this by always focusing on future opportunities and translating these into a commitment to outstanding levels of service, delivered day after day to each and every customer, helping them fulfil their needs and achieve their aspirations.