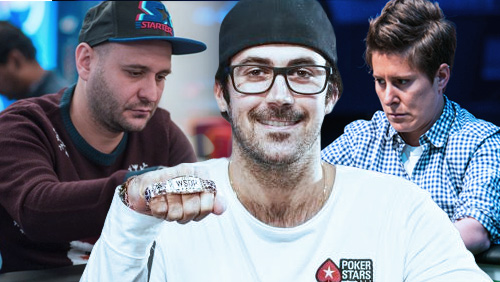 In today’s World Series of Poker roundup we bring you news of a huge bracelet sweat between Jason Mercier and Vanessa Selbst, Roberto Romanello denied a Triple Crown, and much more.

Vanessa Selbst is in a world of hurt.

After Jason Mercier had become the 39th player in history to win four gold bracelets, after victory in the $10,000 2-7 Draw Lowball Championships on Monday, the PokerStars Team Pro revealed that he stood to win $1.8m from Selbst if he could win two more by the end of the summer.

Coming into the 47th Annual WSOP, the poker community were aware that Selbst had offered Dzmitry Urbanovich 200:1 odds that the Pole wouldn’t win three bracelets in his rookie year. But news of the Mercier bet didn’t emerge until more recently.

The betting has created some controversy. If PokerStars teammates Mercier and Selbst were good friends before the summer, that relationship must now be strained to breaking point. Selbst released a statement on Twitter explaining how she offered Mercier odds of 180:1 after she had been drinking. After her hangover had subsided and the news of her latest bet had sunk in she offered Mercier to back out of the bet for $1k.

And it’s this refusal to allow Selbst to backtrack from her drunken bet that has set the sabre tooth tiger amongst the pigeons.

Should Selbst be Worrying?

That doesn’t seem a lot, but it’s enough to scare Selbst into offering Mercier $100,000 to back out of the bet. Mercier’s refusal of what is a large sum of money for effectively doing bugger all is also a sign that one of the world’s greatest poker players believes it’s possible.

And it seems the sniff of $1.8m has affected his play. No sooner had he won the 2-7 Draw Lowball Championship, he jumped into the $10,000 Razz Championship and now leads the final eight players with a substantial portion of the chips in play.

If Mercier does win bracelet number five, Selbst will be under incredible pressure because the WSOP is still to get into full swing. It’s common knowledge that professional players have microscopic amounts of their action when competing in bigger buy-in events, so it’s doubtful Selbst has been in this situation before, and $1.8m is an awful lot of money to be lost on a single bet.

From someone who may lose a million to a few people who have just won a million.

7,190 entrants created a $9,706,500 prizepool, making the 2016 Millionaire Maker the eighth largest event in the games history, and Jason DeWitt has beaten Garrett Greer in heads-up action to take the million dollars first prize. Greer won’t be too disappointed as he also picked up a million dollar consolation prize.

It was an unusual pay structure with a chasm of $500,000 between second and third. To get three-handed and then miss out on the million would be tough, but one doubts there were too many consternations, this time, around after kindergarten teacher, Lisa Meredith, picked up the half a million dollar booby prize after competing in her first WSOP event of her life. Meredith’s amazing feat of jiggery-pokery is the fairytale of all fairytales and exactly what the WSOP should be all about.

Paul Volpe continues his exceptional recent WSOP form with his second bracelet victory in the past two years. 491 entrants created a $663,820 prizepool in the $1,500 Eight Game Mix, and Volpe defeated Jason Stockfish in heads-up action.

Volpe must have felt the butterflies after getting heads-up. Last year, he lost out to Shaun Deeb and Keith Lehr at this same stage in the $10k Pot-Limit Omaha (PLO) and Heads-Up (HU) Championships. But bracelets are not Volpe’s primary focus. It’s all about the money and security for his family.

“With me, poker is mostly about the money.” Volpe told WSOP officials after his win. “I know with the World Series of Poker there’s so much history and I respect that. But I am here mainly to earn a living, make money, and support my family.”

And he does a pretty good job of making a living. The 35-year old has now cashed 27 times in WSOP events, made eight final tables, and has now won $4.9m in live tournament earnings.

Roberto Romanello has just finished third in a $1,000 No-Limit Hold’em event after ploughing through a field of 2,242 entrants. His $142,926 cash is the largest of his esteemed WSOP career, but that won’t matter to the Welsh All Time Top money earner. He would have given it all up for the touch of gold.

It was a great spot for the Welshman. The final table was devoid of experience, and the eventual winner, Chase Bianchi, was cashing in a WSOP event for his first time whereas Romanello was cashing for the 22nd time and making his sixth final table. Biology teacher Erik Silberman finished second.

A few others superstars who came close to an appearance on the Mothership were Jeff Gross (23rd), Michael Telker (26th), and Georgios Zisimopoulos (31st).

Johnson also finished 47th in the Colossus II. The 30-year old was making his 33rd WSOP cash, and eighth final table. He has now earned $2.5m in live tournament ITM finishes. It was a timely win. His wife is six months pregnant.

Chino Rheem made the final table finishing in the eighth position. Phil Hellmuth created a new WSOP record for ‘most WSOP cashes’ when he cashed in 45th place for $5,801, his 116th WSOP career cash, and the first of the 47th Annual WSOP.