Home / Poker / WSOP Review: Gold Bracelets For a Prince, a Porter, and Laplante 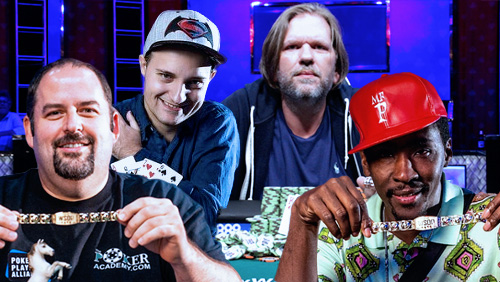 Four World Series of Poker bracelets to catch up on including Mike Cordell in six-handed action, Rep Porter winning his second Razz title, and Jean Gaspard and Ryan Laplante climbing on the first rung of the ladder.

Four World Series of Poker (WSOP) bracelet victories to catch up on and we will bring them to you in event order.

222 players cashed in the six-handed action including a certain Belgian, who continues to prove life begins in your 70s. Fresh from his 2015 November Nine appearance, Pierre Neuville, 73, made it all the way to heads-up before Cordell finally edged him out of the competition.

Cordell was making his fifth WSOP cash and his first final table. He now has a WSOP bracelet to go with his World Series of Poker Circuit (WSOPC) gold ring.

Other notables to put in a deep run were Daniel Strelitz (9th), Paul Hoefer (11th), and Hans Winzeler (12th)

The Haitian-born poker pro has made the money 19-times at WSOP events; this was his third final table. Like Cordell, the former professional basketball player is also a former WSOPC gold ring winner.

The event also saw another deep run from the magnificent mixed game player John Monnette who added a third place finish to the runner-up spot he obtained against Ryan D’Angelo in the $1,500 2-7 Draw Lowball tournament. Monnette is currently second in the 2016 WSOP Player of the Year (POY) race with 547.47 points.

The best of the rest who came mightily close to that final table include James Obst (7th), Dan Smith (9th), and Alexander Kostritsyn (10th).

Ryan Laplante currently sits fifth in the early POY rankings after winning the largest non-Hold’em tournament ever held at the WSOP.

The early leader of the POY race is Rep Porter after winning the $1,500 Seven Card Razz event. 461 entrants created a prizepool of $622,350, and Porter defeated one of the toughest final tables thus far to win the $142,624 first prize.

The ever popular Millionaire Maker attracted 7,190 entrants, $9,706,500 in prize money, and both the winner and runner-up will take home million dollar prizes.

491 entrants competed in Event #15: Eight-Game Mix (Six-Handed) and Paul Volpe leads the final 11 players at the end of Day 2. Volpe will fight it out with the likes of Bart Lybaert, Gavin Smith, and Chris Klodnicki for the title and first prize of $149,943.