Home / Poker / WSOP Review: Keeline Makes a Beeline For The Colossus II; Berg Cool as Ice to Win the Bracelet in DC 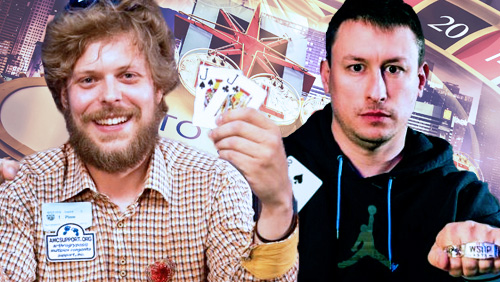 Lee Davy keeps you posted on all the latest news from the World Series of Poker including Ben Keeline’s victory in the Colossus II, Lawrence Berg winning a bracelet in the Dealer’s Choice, and much more.

Ben Keeline came into the Colossus II final table as the favourite on paper, and he used all of that experience to ensure he walked away with the bracelet and the million dollars first prize.

It’s the second gob of gold that Keeline has taken from the World Series of Poker (WSOP) after winning a World Series of Poker Circuit (WSOP) gold ring back in 2013. His biggest achievement before becoming a millionaire was to finish runner-up to Jose Montes in a WSOPC Main Event field in Choctaw picking up $218,762.

Keeline defeated 21,613 entrants, the second largest field in live tournament history. It was a final table that included two players from the Czech Republic and a lot of potential upsets with a field of limited live tournament ITM experience. The exception being Jonathan Borenstein, who clocked it at over half a million dollars thanks to some deep runs in World Poker Tour (WPT) events.

Lawrence Berg has beaten 388 players to become the newest Dealer’s Choice champion. His $125,466 first prize was by far his largest score of his live tournament career. It was only his fourth WSOP cash, and his previous best cash was an 11th place finish in a WPT side event for just under $50,000 back in 2009.

Berg’s success meant more heartache for Yueqi Zhu, who had to settle for the role of bridesmaid for the second time in his career. He also has multiple third and fourth place cashes in a career that spans nearly two decades.

It was also the second WSOP event that witnessed the presence of Chris ‘Jesus’ Ferguson. His 19th place finish represented his first cash in an open event since 2010. He last won a bracelet back in 2003 when he picked up two in a performance that would have surely guaranteed him the WSOP Player of the Year (POY) had it been invented.

Congratulations to Berg for managing to glide through that lot.

Other notables that made a run at the final table included Randy Ohel (8th), Jared Bleznick (17th), and Brad Libson (18th).

The first of many $1,500 No-Limit Hold’em events has hit the ground running. Event #6 attracted 2,016 entrants and at the end of Day 1, Roman Rogovskiy was the chip leader bagging up 188,700 chips and eliminating no other than Phil Hellmuth on his route to becoming the headline act. 321 players survived, and chief among the bigger stacks was Steve Gross (142,800), Mohsin Charania (132,400), and Georgios Zisimopoulos (103,000).

PokerStars Team Pro, Naoya Kihara, leads the final 201 players at the end of Day 1 in Event #8: $1,500 H.O.R.S.E. 778 players entered the event to push the prize money over a million dollars. 117 players will get paid in that one. The winner walks away with $212,604. The British pair of Stuart Rutter and Richard Ashby are at the right end of the chip counts.