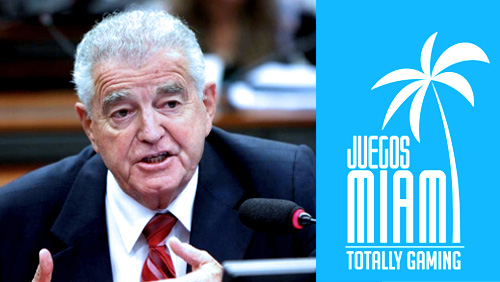 Juegos Miami adds BgC Briefing to its agenda to report on the findings emerging from the 2nd Brazilian Gaming Congress that just concluded on May 12 in Brasilia.

Federal Deputy Nelson Marquezelli is one of the key political figures involved in the current legislative process that might see gambling legalised in Brazil by the end of the year. The bill, that authorises a creation of 31 integrated resorts with casinos and a number of bingo halls in the country, has been making steady progress in the Senate’s Gaming Commission set up at the end of 2015, and is expected to end up on the new president’s, Michel Temer’s, desk by October. According to the people close to the president, he is in favour of a quick passage of the bill to aid Brazil’s volatile economy without taxing the citizens directly. Recent statements, made by his two ministers, Henrique Eduardo Alves (Tourism) e Geddel Vieira Lima (Government Secretary), support that belief.

Marquezelli, together with other prominent deputies, including Elmar Nascimento, Herculano Passos, Antonio Goulart and C?sar Halun, participated in the recent Brazilian Gaming Congress held in Brasilia on May 11-12. The event gathered around 230 attendees who heard promising political statements in fierce support of gambling legalisation. It is no surprise, considering the size of the potential business opportunity should Brazil authorise gambling, that the eyes of the gaming industry interested in Latin America are now turning towards this promising country. To provide the latest on the legislative and political process, timelines and key institutions involved, Juegos Miami, an event that will gather all of the key organisations doing business in Latin America and produced by Clarion Events, organiser of BgC, will host a briefing, featuring some of the key BgC speakers and participants. Leading the session will be Igor Federal Trafane, President, Brazilian Texas Hold’em Confederation, joined by Deputy Nelson Marquezelli, Parliament Ombudsman Osmar Lopes de Moraes, Magnho Jose de Souza, President of the Legal Gaming Institute and Luiz Felipe Maia, Director, Franco, Yoshiyasu, Maia, Simoes and D’Alession Advogados.

‘The current gambling bill that I champion in Brazil is aimed at bringing sustainable investment to Brazil and I strongly believe that integrated resorts and casinos can deliver substantial revenue to the country. By coming to Juegos Miami, I want to let the gaming industry know that we are serious in our efforts to legalise gambling and will be soon open for business’, Deputy Marquezelli commented on his decision to join the Juegos Miami speaker line-up.

Juegos Miami is scheduled to take place in the Biltmore Hotel on May 31 – June 3. To apply for your place at the event, go to www.juegosmiami.com.

About the Juegos Miami brand

Juegos Miami is organised by Clarion Events and Urban Expositions, the leading producers of gaming events globally. These include ICE Totally Gaming, NIGA, GiGse and EiG along with the Totally Gaming Academy – a series of training events for the industry. With a successful track record bringing buyers and sellers together in cost-effective and convenient settings, both Clarion and Urban have the experience and industry relationships with this type of specialised trade show audience. For more information: www.juegosmiami.com.